The 2017 edition of the 24 Hours of Le Mans is turning out to be a race of attrition. And while cars from the LMP1 class have already gone into retirement  shockingly the two Toyotas  it's been the LMP2 cars that seem to be flourishing over the Circuit de la Sarthe. Going into the 24 Hours of Le Mans both, the Gulf-liveried Tockwith Motorsport team participating in the LMP2 class in a Ligier JSP 217 and the Gulf Racing UK team fielding a Porsche 911 RSR in the GTE Am category, were conservative about their chances in the race. Speaking to OVERDRIVE, Karun Chandhok said ahead of the race that realistically, since the Orecas were doing better in the LMP2 category, the Tockwith Motorsport team was at a slight disadvantage since they were driving a Ligier. Karun stated that he hoped the team could make it in the top 8 in the LMP2 category. But this was also something he said would happen only if all things went completely in their favour.

As things seem to be turning out, the race is actually going in favour of the Tockwith Motorsport team. The first stint of the race was driven by Nigel Moore and he put in a solid performance. Indian driver Karun Chandhok took over the wheel of the Tockwith Motorsport Ligier and drove for three hours. The maximum number of stints that Karun has driven continuously in his previous Le Mans outings was four. However, in his first outing with the Tockwith Motorsport car this year, he drove five stints continuously and then handed it over to his young 17-year old teammate, Philip Hanson. Hanson, although a rookie, put in a solid performance as well and handed the car back to Moore. 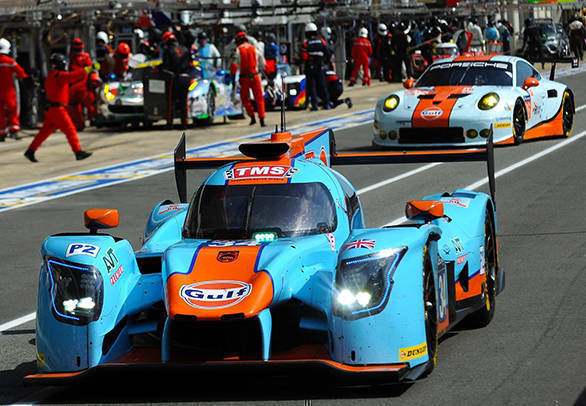 It was in this time of the race that there was chaos in the LMP1 class with two of the leading Toyotas retiring and certain mishaps happening to other cars along the way as well. This, combined with a solid performance from all three drivers, ensured that the Tockwith Motorsport machine was running as high as 11th place overall which was terrific especially for an LMP2 car and also for a team that is just debuting at Le Mans. Approximately at the 12-hour mark, Moore handed the car over to Karun after a pit stop, who then drove steadily at 13th place overall. Hopefully, the team can continue their solid performance and hopefully they will even be able to break into the top 8 of the LMP2 class which looks realistic at this point.

The second machine that features the iconic blue and orange Gulf livery is the No.86 Gulf Racing UK Porsche 911 RSR. The team made their debut in 2016 when they had a fairly good outing at the 24 Hours of Le Mans and this year, they seem to be on track to do fairly well once again. Hopefully, they can better their performance from last year, which was a 5th place finish in the GTE Am category. The drivers of this car happen to be Ben Barker, Nick Foster and Michael Wainwright. Having a driver as quick as Barker is certainly an advantage for this car and it's also likely to be the reason that they're running quite solidly all through. Foster is a rookie driver, but he has put in a strong performance as is Wainwright. As the 12th hour of racing was completed, which is the halfway point of the 24 Hours of Le Mans, it was Foster behind the wheel of the car running 11th in the GTE Am category and 44th overall. However, with 12 hours left to go, there's still plenty that can happen and there is the chance that we could see this car move much higher up in the order provided nothing terribly unusual happens.