Le Mans 2015: Porsche on pole for historic battle at Sarthe

Porsche are flying! They demonstrated this during the first qualifying session of the 2015 edition of the 24 Hours of Le Mans at the Circuit de la Sarthe. The time of 3min 16.887sec that Neel Jani set in the No.18 Porsche 919 during the first qualifying session proved to be unbeatable. In fact the lap time was so terrific it broke the Le Mans pole record set back in 1989. 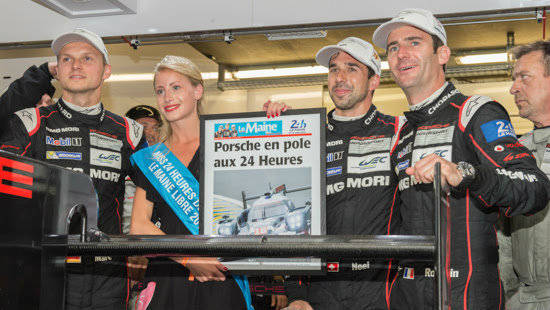 The second Porsche, the No.17, with Timo Bernhard at the wheel took second spot on the grid, with Nicky Tandy's No.19 car third on the grid.

It was defending champions Audi who took the next three positions on the grid. The No.8 car of Lucas di Grassi, Loic Duval and Olivier Jarvis managed to take fourth on the grid, followed by 2014 winners in the No.7 car - Andre Lotterer, Benoit Treluyer and Marcel Fassler in fifth. Felipe Albuquerque managed to improve the No.9 Audi's position to sixth on the grid.

The two Toyotas had a tough time, finishing 2.5 seconds behind the slowest Audi, with Stephane Sarrazin taking the No.2 car to seventh. Sebastien Buemi qualified the No.1 car in eighth.

Tough stuff also for the Nissan team who could not do better than 12th, 13th and 15th on the grid.

Pole in the LMP2 class went to Richard Bradley at the wheel of the KCMG, with a timing of 3min 38.032sec. Karun Chandhok and the Murphy Prototypes team will line up eighth in the LMP2 class, after Nathaneil Berthon managed to elevate the team from 14th position.

In the GTE Pro class, Richie Stanaway put the No.99 AMR Vantage on pole, while Pedro Lamy was quickest in the GTE Am No.98 car.