Land Rover rolls off its six-millionth vehicle from Solihull

Land Rover has reached a new milestone in its automotive journey. The Tata owned British manufacturer has rolled its six-millionth production vehicle off the assembly line at its Solihull factory. The vehicle is a Range Rover LWB Vogue SE.

To celebrate this achievement, Land Rover has kitted the SUV with a one-of-a-kind puddle lamp that projects a unique image when the car is unlocked. The image, essentially, is Land Rover's logo with the milestone figure hovering above it. Quite a cool way to show the world that the particular Range Rover is indeed, a landmark SUV. 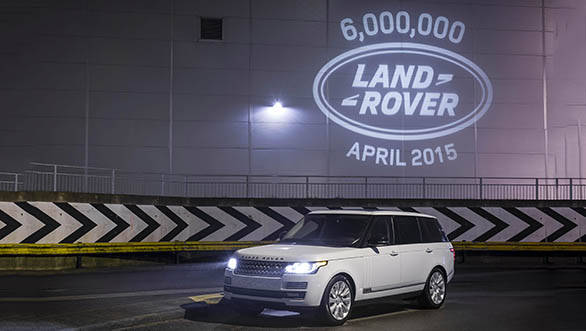 Land Rover will showcase the six-millionth car at a number of celebratory events before selling it off to a Chinese customer.

Speaking about the historic achievement, Andy Goss, director, group sales operations, Jaguar Land Rover said, " For 67 years Land Rover has been building the world's most capable all-purpose vehicles. Over this period, a range of ground-breaking innovations and technologies have blended great design, refinement and unmatched all-terrain capability. It's fitting that the 6,000,000th Land Rover to be produced is a Range Rover, since this year marks the 45th anniversary of the original Range Rover's launch and even today, the vehicle remains peerless. With the growth of sales in China since the latest version of the Range Rover was introduced in 2012, it is entirely appropriate that this landmark vehicle is destined for a Chinese customer."