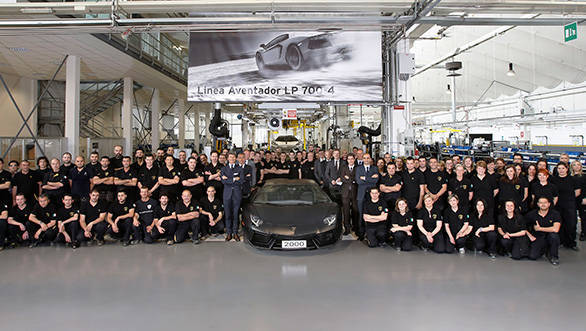 In a little over two years, Lamborghini has rolled out its 2000th Aventador hyper car out of its Sant'Agata Bolognese facility near Bologna, Italy. The milestone 2000th Aventador LP 700-4 was painted in Nero Nemesis colour and bears the chassis number 2000. It will be dispatched to the chief intelligence officer of AT&T, who apparently was impressed with the car after he drove it at Palm Beach in a Lamborghini organized event. He is no stranger to Lambos though, with a Gallardo LP 550-2 Spyder already parked in his garage.

Back to the car then. The Lamborghini Aventador became the Italian marque's flagship model a good two years ago, replacing the Murcielago. Earlier this year, Lamborghini introduced stop/start and cylinder deactivation to the Aventador to enhance its fuel efficiency. Currently, Lamborghini's facility in Italy rolls out on an average five cars a day. This can be attributed to the production capacity increase in 2012 from the three vehicles a day regime. Lamborghini took around 15. In stark contrast, the Murcielago, the production of which started in 2001, achieved the milestone of rolling out its 2000th unit in 2006.

This year, Lamborghini launched the open top version of the Aventador, the LP 700-4 Roadster. The company says that they have their order books full for a year now with both the coupe and convertible versions booked solid.  Pavan Shetty, head of operations Lamborghini India told OVERDRIVE that one customer is soon to get delivery of his Aventador roadster. Lamborghini's future plans include putting the URUS SUV to production by 2017.