KTM India records 1500 bookings for the 390 Duke, deliveries by end-September

Deliveries of the hotly-anticipated KTM 390 Duke will officially commence by September-end this year, announced Bajaj's VP of Probiking, Amit Nandi, at a recent company event. The 390 was launched in June for Rs. 1,80,000 (ex-showroom Delhi) and currently commands a 90 day waiting period.

Owing to this competitive pricing, the 390 Duke has reportedly garnered 1500 bookings since its launch. At present, the waiting period for the bike is 90 days. The Duke is a product designed, developed and produced at Bajaj's Chakan plant near Pune. 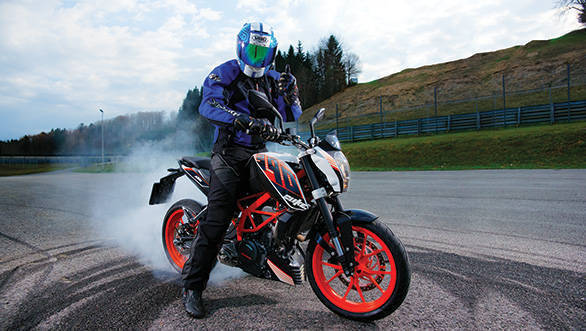 The 390 Duke has reportedly garnered 1500 bookings since its launch

The deliveries of the bike are yet to begin in earnest, and some of the delay could be attributed to a now-resolved extended workers' strike at Bajaj's Chakan plant which produces the 390. The company has, however, reiterated that this had no impact on KTM production and that deliveries of the sportsbike will take place as announced. Having garnered around 750 units per month in the past 60 days, the 390 Duke's bookings are much higher than competitors like the Honda CBR250R and Ninja 300.

The KTM 390 Duke is powered by a 373cc, single-cylinder, fuel injected, four-stroke engine that delivers 43.5PS of power and 37Nm of torque. A 6-speed gearbox moves all that output to the tarmac. Couple this with sticky Metzeler tyres and standard ABS, and the Duke 390, as a package, provides great value for money. The price tag at launch was said to be introductory, but there has been no indication of any hike as yet.