The Karnataka Motor Sports Club has announced the dates for the first round of the Green Run TSD Rally 2014. The Rally will be held on May 17-18. With entries open for all, the last day for submission of entries is May 16. 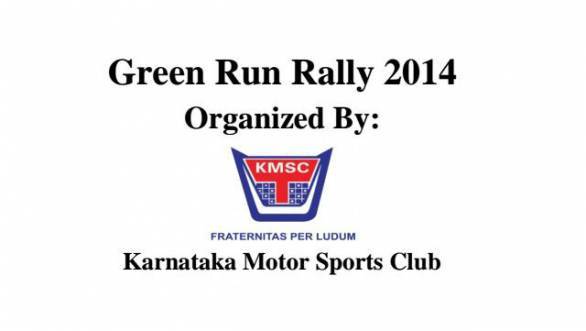 With the objective of increasing environmental and road safety awareness, the Green Run Rally will be flagged off on Monday from The Club, Mysore Road. The KMSC is also going to felicitate six individuals who have recently cleared the senior scrutiny exam of the FMSCI, the premier motorsport body in the country.

Covering a distance of approximately 120 kilometres, the Green Run Rally 2014 will run in compliance with the prescriptions of the FMSCI. With another two rounds to follow in the coming months, the third round is expected to take place along with the fourth round of the Indian National TSD Rally Championship on the 16th of August.  Entries will be accepted for the three groups which include Pro Expert, Pro Stock and the open 2 Wheeler category. Cash prizes upto Rs 10000 will be awarded to the drivers and navigators in the Pro category along with trophies for the top five finishers. The Rally is also expected to feature the Tata team who are looking to have a run before the INTSDRC. More information about the Rally can be found on the KMSC website.