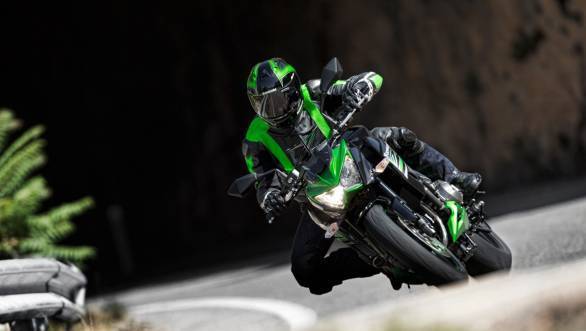 This is the fifth CBU Kawasaki to go on sale in India. Kawasaki has rapidly expanded their range in India once they began their CBU operations with the excellent Ninja ZX10-R. The company aims to sell around 400 of the five CBU models this year.

"In 2014, we expect to sell around 400 units of five CBU models in the country, including the Z800," India Kawasaki Motors deputy managing director Shigeto Nishikawa told PTI. He added that the company also plans to sell around 1,400 units of Ninja 300 and Ninja 650 models, which are assembled in India. The other CBU models available in India are ZX-10R, Z1000, Ninja 1000 and ZX-14R. Kawasaki is expected to launch at least two more motorcycles in India this year - the Versys 1000 and the ER-6n.

Back to the Z800 then. The Z700 was rumoured to be coming to India a while ago but in the interim, Kawasaki rolled out a comprehensive upgrade that saw the inline four cylinder engine grow to 806cc, which is conveniently just above the 800cc limit about which homologation is mostly about paperwork and relatively painless. The Z800 makes 113PS at 10,200rpm and peak torque is 93Nm at 8,000rpm, which makes the motorcycle powerful enough to be a visceral ride on our streets. Being a budget motorcycle abroad, the Z800 doesn't get the kind of fancy equipment or electronics like the ZX-10R but the international reviews say the steel backbone frame and adjustable suspention come together very effectively.

Visually, the Z800 is aggressive but is clearly the older face of naked aggression for Kawasaki - the new Z1000 wears the meaner, sleeker new one. Minimal, sharp bodywork and stunning all-digital meters and all round out what should be a fast, comfortable motorcycle to ride on India streets. Kawasaki also says that the larger motor makes for a better highway machine, with a tall sixth gear allowing the use of lower revs at cruising speeds for economy, range as well as comfort.