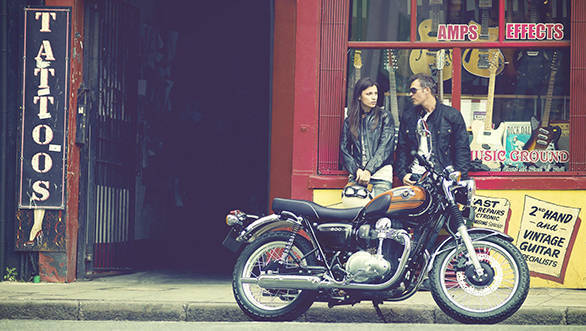 The authentic retro look of the bike is considered as a modern day classic by many. It features a tank badging which resembles W1, the first motorcycle in the W series. The motorcycle is powered by an air-cooled vertical twin engine which displaces 773cc and available with bevel gear-driven camshaft. The retro form is maintained as Kawasaki has kept the drum brake on the rear. The 2017 W800 is named as the Final Edition because the manufacturer has decided to discontinue the product as it won't be able to meet the future European motorcycle regulations.

Kawasaki introduced the W1 back in 1966. Equipped with a 650cc engine and belting out 50PS, the W1 was the first high-performance 4-stroke under the Kawasaki brand. The manufacturer then extended the family line of W series by introducing W650 in 1998.

In 2011, Kawasaki introduced the first-ever W800 the idea of combining retro design and modern technology. Morihiro Ikoma, corporate planning director for Kawasaki Motors Europe, said, "It's never easy to say goodbye to an old friend, especially one as iconic as the W800. Paying homage to the W series with this Final Edition is therefore a truly fitting end to a long and successful line of machines."