The Kari Motor Speedway in Coimbatore has always been an important track in the Indian motorsport map. It always holds one round of any motorsport event held in India every season. This weekend, it hosted the first round of the 18th edition of the JK Tyre Racing Championship, which featured three series: The JK FB02 series, the Vento Cup and the LGB F4 series.

On day one, the event held two LGB F4 races, both of which Vishnu Prasad of Meco Racing swept clean. Ajay Kini and Rohit Khanna from Dark Don Racing joined him on the podium in the first race. The second race however, saw Vishnu's teammate Raghul Rangasamy place second and Karthik Shankar (Avalanche) finish third. 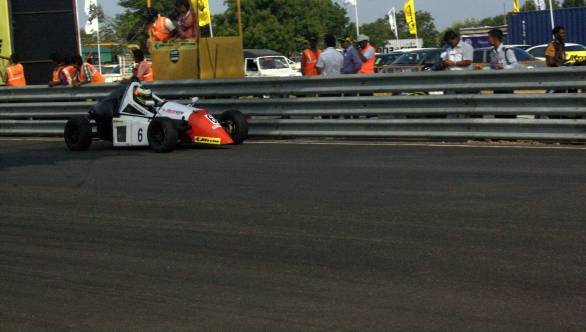 The second day which held the final LGB F4 Race this weekend was more interesting from a spectator's point of view: spins, crashes and parts flying off of cars. Vishnu started fifth on a reverse grid basis and spun out just on the first corner along with two other cars. However, he regained control and managed to hold his position out of the corner and drove on undeterred. Rangasamy spun out at the first corner and retired from the race. Prasad was in his element in the LGB F4 cars and quickly gained positions until he was leading. The yellow flag was waved on quite a few occasions thanks to the numerous spins and crashes, and on one such occasion Prasad had overtaken another car. This got him a 10 second penalty, which pushed him down to sixth place although he finished first ahead of Sudarshan Rao and Chittesh Mandody of Dark Don Racing. This was not the only disappointment in this round of the championship for Vishnu Prasad. In the JK FB02 series, he lost first place to Akhil Rabindra in two out of three races. Rabindra, who had just returned from racing in the BRDC Formula 4 series, brought along a ton of experience that helped him outpace Prasad in this series. In the first race on Saturday, Akhil finished ahead of Dhruv Mohite and Prasad but behind the safety car that was called out earlier. The latter felt that he could have finished with a better position if not for the safety car. However, it was quite evident that Akhil would have stayed on top irrespective of whether or not the safety car had been deployed.

The second race of this series on day two saw Akhil cross the finish line first, but was pushed down to third as he had jumped the lights off the grid. This gave Prasad and Ananth Shanmugam first and second respectively. At the press conference held after the race, Prasad mentioned that he noticed Akhil jump the lights and so all he had to do was stay behind him in second place to clinch a victory. 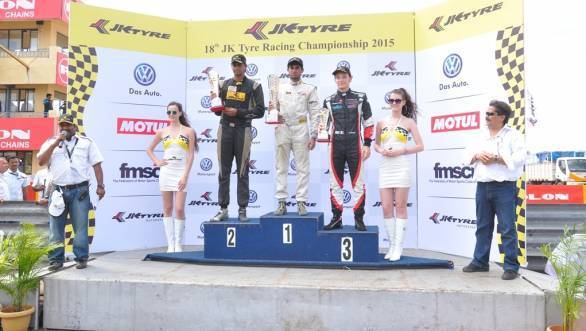 Rabindra's skill seemed to stand out most in his last race of this round. Again, starting on a reverse grid basis, him and Prasad were in the middle with Sandeep Kumar and Kush Maini in the front. 15-year-old Maini pushed past Sandeep Kumar and held the lead for a while until Prasad got ahead to third with Rabindra close behind him. There was a tough fight and a lot of shuffling between the leading three until Prasad finally squeezed in to first place. As he pulled into a comfortable lead, Rabindra got ahead into second and began chasing Prasad down. Within no time, he was on his tail and with close to five laps left and some contact between the two, Prasad succumbed to the pressure and fell behind Rabindra who took first place on the podium. Italian driver, Constantino Peroni caught a bit of luck after a bad start to the weekend, when he finished third in the last race. 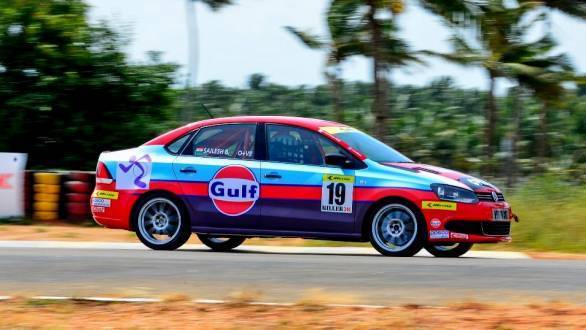 The first ever race of the VW Vento Cup was held on Saturday. Everything is similar to the VW Race Polo Cup held over the last few years, including the VW Vento Cup car that we've driven. With a difference of just .007 seconds between Sailesh Bolisetti - who sat at pole position in the first race - and Anindith Reddy after the qualifying round, it was bound to be a close race - at least between the more experienced drivers. When the lights turned green, Bolisetti pulled away into a good lead and held it for the first half of the race after which his brakes started to give in. Although this meant Reddy had caught up, Bolisetti defended his position well and clinched the first victory of the Volkswagen Vento Cup. 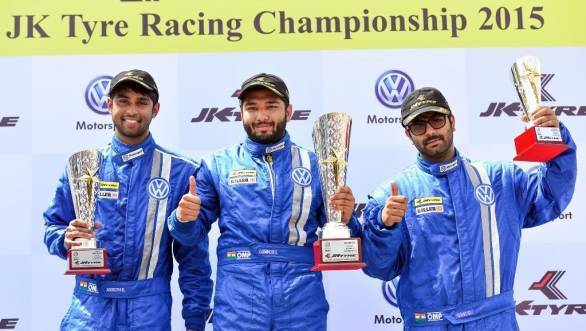 In the second race that was held the next day, the drivers lined up for a reverse grid start. Vignesh Devarajan sat at pole position and was followed by rookie Sahil Gahuri and Sidarth Balasundaram. Sixth, seventh and eighth on the grid were Karminder Singh, Anindith Reddy and Sailesh Bolisetti. Right at the start, Singh managed to jump three positions and on the second lap Harkishan Wadia lost control of his vehicle, which then skidded and rolled off the track. The race was immediately red-flagged to clear the debris. With no major injuries, the race continued with a rolling start. By the end of the 15-lap race, Singh managed to get past the leader and was soon joined by Reddy. Gahuri got past Devarajan and held third until end, claiming his first ever podium finish in just the second race. Bolisetti, due to technical issues with the car, couldn't join the fight up front. Yet he managed to gain two positions finishing sixth.