The 40th edition of the iconic K1000 Rally concluded in Tumakuru (Tumkur) near Bengaluru with Gaurav Gill and co-driver, Musa Sherif claiming the top position on the podium with a lead of almost a minute on team-mates Sunny Sidhu and PVS Murthy in their Mahindra XUV500.

More reasons for the Mahindra camp to celebrate came up as Gill sealed the overall championship title in the penultimate round. He was two seconds behind Sunny Sidhu due to electric problems in his car in the first leg. After tuner Leela Krishnan resolved the problem, Gill gained almost one minute over Sidhu in the second leg on Day 2. This led him to claim the podium finish he needed to seal the championship. Amittrajit Ghosh and co-driver Ashwin Naik finished third. It was then a clean sweep for Team Mahindra Adventure. 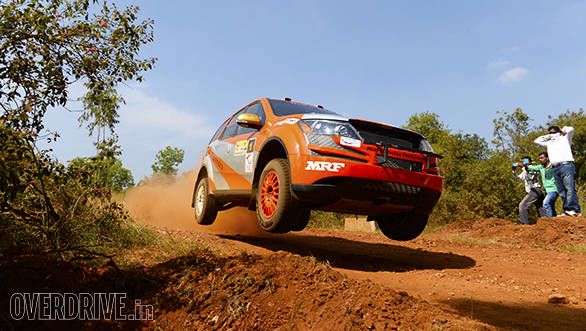 Arjun Rao Aroor Satish Rajagopal in their VW Polo R2 were forced to retire after their car suffered an engine failure in the first leg of the rally. In the IRC 2000 Class, Bengaluru-based Karna Kadur  Sujith Kumar finished first in their Mitsubishi Cedia. Rahul Kanthraj also sealed the IRC 2000 National Championship with a huge lead.

Phalguna Urs and Anoop Kumar, from Mysuru and Bengaluru, respectively, in a VW Polo won the IRC 1600 Class. They are currently leading the championship as they enter into the final round in Chikmagalur .

Meanwhile Adith KC  along with co-driver Harish KN in a Honda City V-tec clinched the FMSCI 1600 Class in the K1000.