"I'm back with a vengeance this year"
Team Sky member and 2013 Tour de France champion Chris Froome's closing words in this video by Jaguar seem to echo the British carmaker's intent behind its first sports crossover, the F-Pace.

While the launch of the F-Pace is slotted for the next year, Jaguar's working hard at sustaining the buzz around the car. The latest in these attempts is a series of short films that will trace the testing and development of the F-Pace prototypes. The first of these will be based on the iconic cycle race, the 2015 Tour de France, where one of these prototypes will be serving as a support vehicle for Team Sky.

But don't get excited just yet  the SUV following the cyclist in the video has been strategically covered in camouflage bearing the black and blue Team Sky livery. Clearly, Jaguar is saving all the juicy details for much later. Add to it is the soft haze that the video is bathed in ensures that it doesn't give away much.

What we do know about the F-Pace so far is that it will feature a new intelligent all-aluminium architecture which was showcased in the Jaguar C-X17 concept. This architecture is claimed to be lighter yet stiffer and more innovative than anything Jaguar has attempted before. Powering the F-Pace will be a range of engines but it's very likely that the new 2.0-litre four-cylinder petrol engine called the Ingenium will be one of the main powerplants. It will also get a new intelligent all-wheel drive system called the All-Surface Progress Control technology. Read more about that about it here.

As a support vehicle for Team Sky, the Jaguar F-Pace prototype will be carrying a four member crew. The bicycle race allows Jaguar to showcase its ideals of Grace, Pace and Space embodied by the F-Pace  note Chris Froome loading equipment, accessories and spares for the race into the boot.

The Tour de France begins this weekend, on July 4, 2015 from Utrecht in the Dutch heartland. 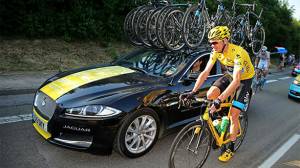