Volkswagen India rolled out the 3,00,000th car from its Chakan Plant in Pune. The iconic car was a left-hand drive export version of the Vento. With high quality production at this Pune plant, Volkswagen India is not only fulfilling domestic demand, but also exporting cars to more than 30 countries across two continents  Asia and Africa. 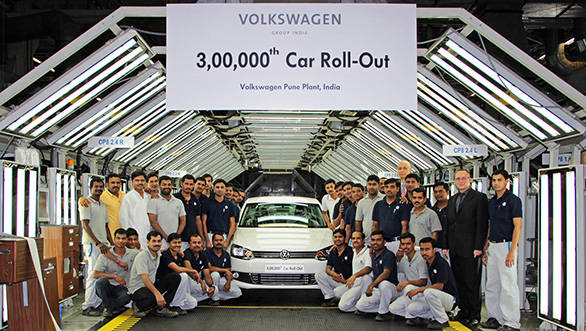 The Vento was a car specifically designed and built for the Indian markets, before slowly gaining attention in the international market

The Vento was a car specifically designed and built for the Indian markets, before slowly gaining attention in the international market. Now, it is not only the developing markets but also other left-hand drive markets where the Vento has made its mark.

The plant's construction began in 2007 and the first car rolled out in May 2009. It currently manufactures Volkswagen's Polo and Vento along with Skoda's Fabia and Rapid.

"The roll out of the 3,00,000th car is indeed a matter of pride for us. The left hand drive Vento is a proof of the international quality products being manufactured at our plant in India. The Vento and Polo are being exported to over 30 countries from our facility in Pune. I would like to congratulate the entire team of Volkswagen India which has contributed greatly to achieve this landmark today," said Andreas Lauenroth, Executive Director Technical, Volkswagen India.