Five years after Sebastian Vettel claimed pole at Monza, he's gone and done it again. Back in 2008 Vettel was the young upstart who took the Toro Rosso team to a rather surprising first place on the grid and then won the race too. It was a sign of things to come. Now, five years later, Vettel has three world championship titles to his name, and is showing no signs of slowing down at all. The German wunderkind dominated the practice sessions at the Italian track, headed the timing sheets through all three qualifying sessions, and, needless to say, claimed pole position too - his fourth of the season, his fortieth overall, starting just behind him on the grid is Mark Webber, which means Red Bull is in a good position for the race tomorrow. 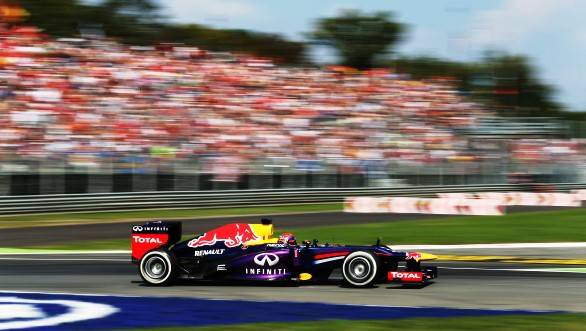 Other than the fact that the qualifying session had a Red Bull at the top all through, there were some shocks here and there.One of which was that the two Lotus cars, that were expected to do well given that the track temperatures in Monza are pretty high, didn't make it to the final qualifying session. Romain Grosjean went bumping over the kerbs in the E21, and got knocked out of contention during Q2, as did his team-mate Kimi 'Iceman' Raikkonen. Another shocker was the fact that Lewis Hamilton, who has taken his fair share of pole positions this season, was another casualty during Q2. Niki Lauda, Toto Wolff and the other powers-that-be at Mercedes AMG F1 really didn't look too pleased.

Another shocker was the man who took third spot in qualifying - Nico Hulkenberg. Hulkenberg qualified third, giving Sauber their best qualifying position all year. Given that Hulkenberg's team-mate Esteban Gutierrez qualified outside of the top-10, Nico certainly did well. Lining up fourth and fifth on the grid, however, are the two Ferraris of Felipe Massa and Fernando Alonso. Alonso did seem to struggle during qualifying, with the Ferrari team urging him to keep up with Massa, and the Spaniard retorting saying 'Massa's too fast!'

Nico Rosberg was the only Mercedes in the top 10, ending up sixth in qualifying. While Daniel Ricciardo (who will swap his Toro Rosso overalls for Red Bull overalls next year) ended qualifying in seventh. Eighth and ninth spot went to Sergio Perez and Jenson Button in the McLarens. And 10th place went to Jean-Eric Vergne in the other Toro Rosso.