Interview: Farooq Ahmed, on the task of organising the 2017 APRC India Rally at Chikmagalur

Organising a round of the Asia Pacific Rally Championship in India is no mean feat. Farooq Ahmed, the Chairman of the Meet, of the India Rally at Chikmagalur, is the driving force behind the event, and is involved in every aspect of the event itself. Here he talks to us about the areas of improvement the event has seen since last year, the preparation that goes into the APRC round in India, the challenge of finding kilometres on which to run the stages, and things that the spectators need to be aware of ahead of the event that takes place between the 24th and 26th of November, 2017. 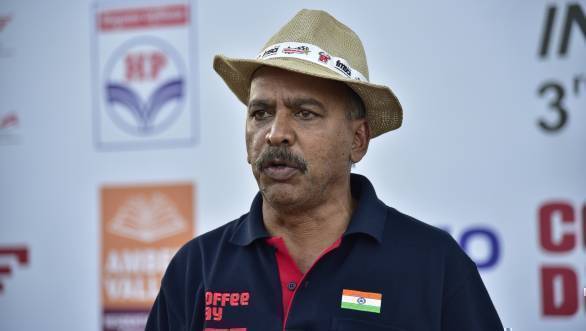 The areas of development since the 2016 edition of the India Rally:
Basically there are two areas. One is the paperwork, where we needed to improve on the overall maps of the event, which we have sorted out. And the maps that we have now are in detail, which will make life easier for the teams and the spectators as well. The second - in terms of the route where we had some narrow sections on the stages we have widened. But you understand that the huge trees cannot be cut, because we are against it. So, wherever it is possible we have widened the roads. I think by next year we should have a new stage. I think 14 to 15 kilometres, would be ready. So the repeating of the stages in the present estates (will stop). I don't think we would be running it multiple times.

On the preparation ahead of the 2017 India Rally:
We've always started our work well ahead. We started our paperwork three months back. Wherein the preparation of the stages was concerned, we started it from the 15th of October. We've also had some unseasonal rains. But as of today, as I speak everything is in place. I'm going to do a final check tomorrow (November 20th). Basically they (the sponsors Cafe Coffee Day) have invested a lot in the last five years, so there's not much road-work to be done, except in places where it gets slushy during the monsoons. We've taken care of that as well. The latest update on the stages, is that the stages as of today are in rally trim.

On the challenge of finding the kilometres to go rallying:
Yes, like I told you, we need more kilometres for the future. We've identified a new stage for 2018. I think it's about 400 acres. I think we should get another 14-15 kilometres, so that the repeating of stages in the present stages can be avoided. Today we have a big challenge, we're basically running the stages in the reverse direction as well, on Day 1. That will be avoided. We can only run the stages in one direction in 2018. Even this year, we have knocked off one stage in reverse - 17 km - simply because some of the drivers already have given a new title to our event, saying that it is the "Rally of 1000 corners". So the basic idea was to reduce a few corners. But we are well within the required distance of the APRC, I mean we're a little short, but we have taken a waiver. But we won't be doing the twisty stage called Chandrapura in reverse.

On the massive task of organising an APRC event and the team involved in it:
As you are aware, in terms of my rallying experience it goes way back. I started rallying back in 1993. I picked the right people to do the job. And we have involved all the major clubs in the country. For example, the COCs of other events. D Ramkumar, the COC of Coimbatore is the COC of our event. Likewise, Sameer Burkhukle who comes in from Nashik is the COC of that event. Pranith Perumal for that matter he has been the Clerk Of the Course for the K1000 for many years. So we have a good team and loads of experience. Basically it's a Herculean task. Running an APRC event is a huge challenge, so we've involved people from other clubs as well. And our own boys are getting trained. We have a lot of youngsters in our club (Motor Sport Club of Chikmagalur). In that sense, yes, we have taken help. We have marshals coming in from Kerala, we have marshals coming in from Erode, then one team comes from Bangalore. Basically each one knows their job, and because it's a challenging terrain, we also have additional radio points for smooth running of the event, in addition to the normal SOS points. We have additional 40 odd radio points to make sure that the rally runs smooth.

On the response the event has seen in terms of participants:
In spite of our event being the last round of the APRC I am glad and happy that people have accepted our invitation. For example, Mike Young, is driving an R2 Volkswagen. I have invited a Sri Lankan who drove last year as well - Sharfaz Junaid - who will take part in the APRC to fill up the grid. I am glad that they have accepted our invitation and they are back here. In terms of spectator turnaround we expect as much as 500-1000 people more. Because the championship is going down to the wire. The championship is still not decided between Ole Christian and Gill. And this year we have made a special gallery at the SSS with a seating capacity of 500. We are introducing new things. And in terms of safety we have always been on time, so there's no last minute rush or anything. Our stages are in rally trim and the containers have arrived and I am happy, since whatever we have put on paper has been implemented. Last year in fact I spoke to Team MRF, and they were pretty happy with the way things had gone. So hopefully we should run a good event like always. But given the limitation that we have and the kilometres that are available to us, it's going to be a Herculean task, it's not going to be a cakewalk for us.

In terms of support from Cafe Coffee Day, the sponsor of the event:
Yes, that goes without saying. It's phenomenal. The support that I have from our sponsor, it's huge. Like I always say, from the stages, to the hotel, to the rally HQ, to the service park, everything belongs to our sponsors which makes life easier for us as organisers to run the event.

On his personal involvement in the APRC Rally India:
See, when you have a sponsor to back you whatever motorsport has given me over the years... it's personal. I have taken a lot of interest to get the APRC here, being a director in the Federation (FMSCI). Because we have not run our APRC events in the past so very well, so I had to prove to the world, we are ready to run an APRC event. In the future if we have the infrastructure and the kilometres we are planning to go a step higher.

On his son making his rally debut at Chikmagalur:
Oh yes, the entire family is excited. Since it's our hometown, and he's got other priorities, he's going to be doing his MBA from next March, so why not. That's another excitement in the family. The only thing it's the first event for Kamran. To be very honest, for me I am only concentrating in the event. Leela (former INRC champion and rally tuner N Leelakrishnan) has offered him a car. I've told myself to be stress free and only concentrate on the event. My wife and younger son are there to concentrate on Kamran. For me the event is a priority.

On what spectators should know ahead of the event:
My sincere request to the spectators and people who have come to watch from far off places is that people are not used to these kind of speeds, and they have to stand in safe places. It's going to be quite tricky because some of the people are not aware that we are running the stages in reverse direction as well. So suppose in the forward direction they stand in one place, they have to make sure that they are not standing in the same place when they are reversing the stages. In terms of safety we are taking extra caution. We have expertise from Bangalore - Chidanand Murthy is back (he wasn't there last year) as a setter. We have Girijashankar Joshy as an additional clerk of the course, basically to strengthen the ground force to be extra cautious especially when we're reversing the stages, because that was a little bit of a challenge last year.

On running the APRC round in India in 2018:
We will definitely get a round if we run the event well. It's just that I have to get an official confirmation from our sponsor. If we run it well, I don't see why we won't get a round for next year. I think the calendar has already been announced and they have given the dates from 1st-3rd of December. We have to get a go ahead from our sponsor. I don't see why our sponsor won't support us, but just that we need a final confirmation from the sponsor.