Interview: CS Santosh on the challenges that lie ahead at Dakar 2019

Just ahead of the ceremonial start podium at Dakar 2019 in Lima, OVERDRIVE caught up with Hero MotoSports rider CS Santosh. This will be Santosh's third attempt at the Dakar with the Hero team, and his fifth Dakar outing since he first competed in the rally in 2015. Here's what he had to say of his expectations, the challenges that lie ahead, and his hopes for the Dakar 2019. 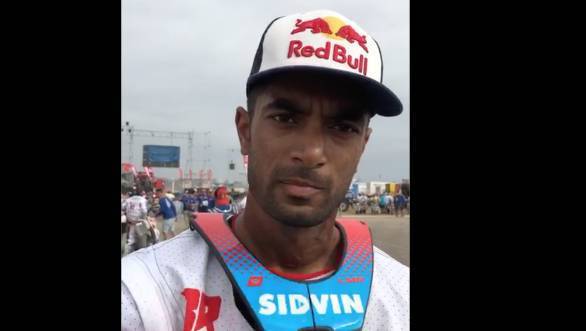 On the conditions of the stages, and the amount of sand at Dakar 2019:
A lot of sand is an understatement. It's only sand this year. Every day is going to be a really physical stage - because 300km in the sand is not easy. Ten days, even if you think it's shorter compared to other Dakars, is a long time to be racing only in the dunes. So, overall, I think the man and the machine will have quite a task to get to the end.

On preparation ahead of coming to Peru:
Well, every year when the Dakar is over, there's talks of where it's going to be held next year. When we knew it was Peru, we tried to do some preparation, like come here for Inca Baja. To try and get a little bit of an idea what the stage is like. At Inca, we knew that the stages were difficult, so it's going to be difficult, the Dakar. On the Hero RR450 Rally motorcycle:
This year, we worked on the motorcycle a lot. Last year, the bike was new, so we didn't have a lot of testing time. We went straight to the Dakar. Now we have one year of testing the new bike. So, we're really confident with the bike, it's working really well. We know we have a reliable motor, so, really happy with that package. And of course, the training remains the same, just more seat time this year. We did a lot of testing this year after last year's Dakar, because we needed to learn to adapt to the sand. Also, the bike was kind of new last year, so we didn't have that much testing. This year, the bike is much better in terms of how it handles. We also have better power displacement than last year, so I think it's going to be easier to ride in the dunes. Overall, we have a reliable package, so we need to be able to bring it home.

On his expectation from Dakar 2018:
My expectation is: First, when you start any rally is to make the finish line. But apart from that, I want to be able to show some speed, you know, so let's see. Well, I've always said I want to be a top 20 guy, so I'm always chasing that dream. So let's make that happen.