On racing in Chennai after a decade:

The last time I raced at Chennai was in 2008 for Speed NK Racing in the Formula Rolons. It was a one-off race. I can't remember doing any races after that. I did a lot of testing, but no races. It's actually been 11 years since I raced in Chennai, because I raced there before I made the switch from single-seaters to touring cars. It was nice to come back and race at the MMRT. Nothing's changed. When you sit on the grid the same red lights go off, obviously one of the lights doesn't work, so instead of five, you've got four. Things don't change, which actually is quite nice.

On how much seat time he had in the VW Vento TC4-A before his race weekend:

It all came together quite quickly. A few days after the last race weekend, they were trying to get their plans together after Karthik Tharani got a one-race ban. But they still wanted to run their car, and VW Motorsport India had a lot of development that they wanted to do. I got a call from Sirish Vissa a few days after that race, and he asked if I would be free to test for them at the night race test that they did at the MMRT. And then to see if I could help them figure out in which direction they could go in terms of setting up the car. And he also said if I was free to race he'd be happy to give me the car to race. And of course, I said yes.

On feeling the nerves ahead of his MMRT comeback:

Yes, a little bit, I can't lie about that. Not just to be back at the MMRT, but also to be back in a racecar. You get that 'Saturday morning feeling' that you get ahead of any race that you're about to start on a proper race weekend. 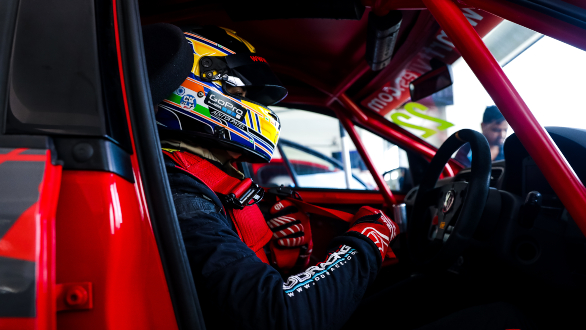 On the gap to Arjun Balu's Race Concepts' car:

We knew Arjun Balu was definitely quicker than us, because they've got a car that's been developed pretty well. And they've been our target right through the last few weeks. We've got three cars, and we played around with different set-ups to see what works best. Because we know there is a target to achieve, because Arjun was setting lap times and that's what we wanted to achieve. Between the last weekend and this weekend, we came to within a second of him. The last weekend the difference in race pace was around two seconds. So that was encouraging. But that's pretty much what we did right through practice and qualifying. This weekend for me was about development. And the rains changed a lot of plans, because they combined practice and qualifying. So for all practical purposes there was no practice. We wanted to save our tyres for qualifying. So on Saturday morning we went straight out for qualifying. It was expected, we knew Arjun would be quicker, because the track was dry. We knew if it rained we'd have a good chance of fighting him, and that happened. 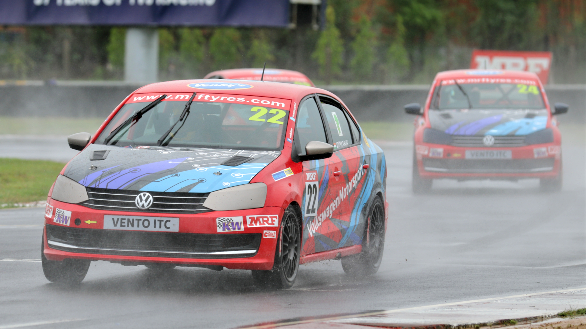 On how his races went:

During the first race, because it was raining heavily, they had us start behind the Safety Car, so it wasn't overly exciting unlike the 1600 race. Fairly straightforward. His car was pretty good in the wet, better than I expected it to be, so I really needed to be on my toes to stay with him. And I watched for a few laps, to see where he was a little weaker than I was. I knew he was strong in the last sector and I was stronger in the faster sector. So I lined him up through Turn 1 and Turn 2, and got a good exit out of Turn 3 and passed him out of Turn 4. But when we came back to the last sector, and came down the bridge into the last corner, I knew every single lap that the car didn't want to turn into that corner. For some reason I thought let me just try and push a little harder. On the exit I put just one wheel on the grass and because it was wet he sucked me in, and he got the position there and he was careful not to lose it again. Overall it was a good dice. Of course, I wish I could have won it, but I made a mistake by trying. The second race was a reverse grid. All of us in the Volkswagens got off to a good start. Ishaan straightaway went off into the lead before Turn 1, Dhruv was second, and I was third. So by Turn 2 we were 1-2-3. But Ishaan had some issues going into Turn 4 so he had to park the car and retire. And then after that it was Dhruv and me, and Dhruv drove really well. Plus being in the same team I didn't want to take any chances. He wasn't making any mistakes. At some places I came pretty close to him, but he wasn't getting flustered so I just followed him to the finish line. In that particular race Arjun made a mistake with his tyre choices, so we went on slicks because it was a drying track, and he went on the wets. So he didn't have the race pace that we had. That worked in our favour. Coming in as a guest driver, I didn't want to fight too hard with Dhruv, because if it ended in disaster, Sirish would never call me to drive for him again. The final race was straightforward. Arjun started from pole, the track was bone dry, and I was second. And he had an advantage over us, but we were happy to see that he wasn't able to pull out that much of a gap over us either. So I know the guys at VW are trying hard to find that second. 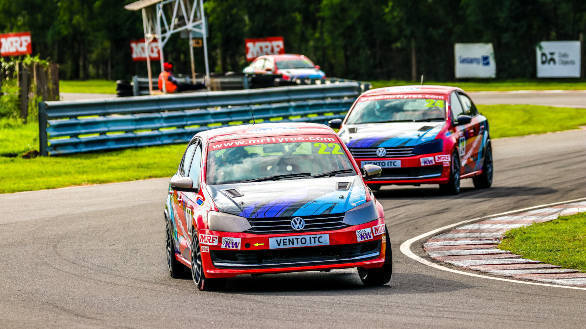 On the scope for development of the Vento TC4-A:

What's nice is the car actually is not easy to drive. I mean if the car felt brilliant, then we'd be scared. Because then we'd know that we can't find a whole second. But the way the car feels right now, we know we can find a lot more than that if we do get things right. But it does take a lot of track time, it does take a lot of work. They're already working on it, which is good.

They are definitely good cars. There's a lot of work that's gone into them. Great engines, great gearboxes, good dynamics. We're working on the dynamics to make it better. I think once the cars are fully sorted, we should have proper race-winning cars. We haven't even started work on the aero yet. Arjun's car has a lot of aero, and if you look at the Ventos, they've got nothing. So there are plenty of possibilities. My race weekend with VW was a one-off, and at the next race Karthik will be back. Unless VW decides to build another car, if they're nice to me, then I'd be happy to be back behind the wheel! 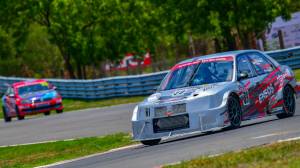