Audi India-backed racer Aditya Patel got back in a race seat after a seven-month long break from racing. The Indian driver, now racing in the International GT Open Series, and co-driver César Campaniço are competing in the GT3 Class of the championship, where they are piloting an Audi R8 LMS. The duo finished 6th overall at the first round at Nurburgring after a penalty in the second race cost them 20 seconds. 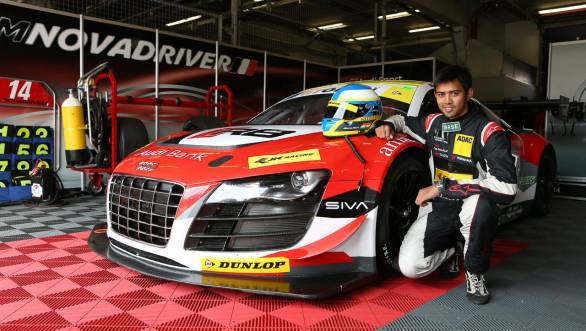 Patel and his Team Novadriver team-mate didn't get any testing time in the Audi R8 LMS. Nonetheless they put in a spirited show to finish within the points. The first race started with Campaniço in fifth place, which is where they had qualified - a position he managed to retain through to the driver change. He then handed the car to Aditya, who made no mistakes until a bad move involving a change of tyres cost them three places. Thus they finished the first race eighth.

In the second race Patel started sixth on the grid. He had a good race as he guided the car into the pit stops retaining track position. César took over from there and appeared to be in fine form climbing up to third place and looking to compete for the win. Unfortunately a 20 second penalty, brought on by leaving the pitlane ahead of the stipulated time, scuppered things for him.This saw Team Novadriver finish in 11th place at the end of the second race.

Though the slip from third to eleventh obviously damaged their hopes of a podium and chances in the championship, Aditya and Campaniço will be looking forward to the second race at Portimao, Portugal. The duo aim to gain a better understanding of how the car will perform and work on the mistakes that cost them a podium in Germany. We'll keep you updated on how they fair in Round 2. Watch this space.