INRC 2018: Gaurav Gill and Musa Sherif lead after day one of Rally of Arunachal

The first of two days of the Rally of Arunachal took place today on the outskirts of Itanagar. This is the first tarmac round of the this year's Indian National Rally Championship, taking place on NH 425 between Chimpu to Hollongi.

Championship leader Gaurav Gill continued his good run this season, topping the timesheets at the end of the four stages held today, November 3. He, along with co-driver Musa Sherif won three out of the four stages. They clocked an aggregate time of 31m 22.9s in their Mahindra Adventure Super XUV500. The only abberation in the run was the five seconds lost to a tyre burst. He clocked speeds over 180 kilometres per hour, recording an average speed of 115.55 km/h in the opening stage.

The other Super XUV500 finished third, piloted by Amittrajit Ghosh and Ashwin Naik. They finished with a combined time of 33m 5.1s. They would have performed better if not for a setback in the second stage, where a power issue saw them finish ninth. 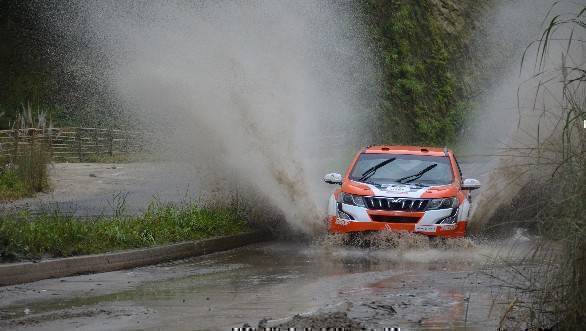 The second place overall was taken by INRC-2 competitors, Snap Racing's Phalguna Urs and Srikanth, finish the stages in 32m 54.7s. This was helped by one second and two third-place stage finishes. They, however, slipped to fifth place in the fourth and final stage of the day, to be trailing Gill and Sherif by 1m 31.8 s.

This outing was good enough to give them the lead in the INRC 2 category, ahead of top contenders Rahul Kanthraj (Vivek Y Bhatt) and Karna Kadur (PVS Murthy).

In the INRC 3 category, Suhem Kabeer (Jeevarathinam) made the most of category championship leader Vikram Rao Aroor's (Somayya AG) bad luck in Stage 4 to take the lead. Suhem, however, was in his element, winning two of the stages in his category.

Five-time INRC champion Gill was pleased with his driving, despite the puncture. He said the first stage went off very well. They, however, hit a stone in Stage 2 and picked up a puncture. He also pointed out that despite this, they still managed to finish in decent time which helped them stay in the lead.

Gill explained that the final day might be tricky as the track was likely to be muddy following rains while they only had tyres suited for tarmac.