The first FCEV to have been indigenously developed has completed preliminary tests. This Pune based project began four years ago and is the work of a group of scientists from two Council of Scientific and Industrial Research (CSIR) labs, the National Chemical Laboratory (NCL) in Pune and the Central Electro Chemical Research Institute (CECRI), Karaikudi, and KPIT.

The team retrofitted an existing Mahindra e-Verito EV sedan with a 10 kW electric cell stack which was then tested to achieve a range of 250 km. This test was carried out under standard Indian driving conditions at speeds between 60 to 65 kmph, said the team behind the project. This car was fitted with a Type III commercial hydrogen tank that stores 1.75 kgs of the gas at 350 bar pressure. 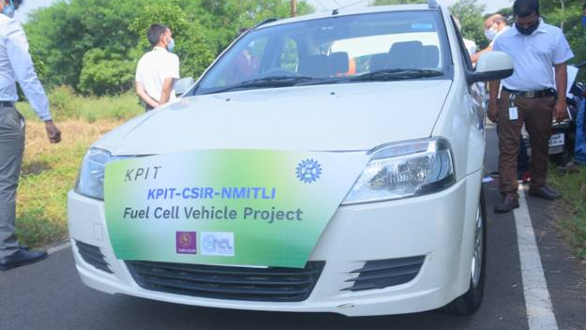 The team behind the development feels that this tech is currently better suited for commercial vehicles in the Indian context. HFCEVs require a much smaller battery than equivalent EVs, which should be a major factor in this tech replacing the current crop of EV commercial vehicles that have seen growing adoption in public transport.

Put simply, a hydrogen fuel cell powertrain such as the one developed here is powered by the electricity generated by an electrochemical reaction between the hydrogen from the tank and oxygen from the air. Hydrogen molecules are split into protons and electrons. The protons are passed through a membrane while the electrons move through a circuit. These eventually combine again with oxygen, generation water and heat as the only by-products. This makes FCEVs very eco-friendly and with the absence of any moving parts also very reliable.