Indian FTR Carbon teased, will be revealed on May 1, 2020

Indian Motorcycle has released a 12-second clip on its social media channels which mentions of a new motorcycle called FTR Carbon. The clip has the text, As close as you can get to the three time championship winning FTR750. As seen from the video, this latest addition to the American motorcycle manufacturer's portfolio - the FTR Carbon, is essentially based on the Indian FTR1200 but packs in loads of carbon fibre.

The clip does not reveal much in terms of details on the features or specifications, except that the fuel tank is completely made of carbon fibre with the brand's dual-tone burgundy white shade. We expect the FTR Carbon to have more components of carbon fibre, in addition to the petrol tank. This could be a limited edition offering that will be positioned about the regular Indian FTR1200.

In terms of powertrain, the Indian FTR1200 gets a 1,203cc V-twin engine that is good enough for 124PS and 118Nm of torque. The engine is mated to a 6-speed gearbox. The electronic includes a switchable ABS (antilock braking system), different riding modes and a 6-axis inertia management unit for an advanced traction and stability control. The FTR 1200 S is styled more toward the scrambler body type, however, with a different approach. The wheels are alloy instead of spoke-wire, also the exhaust does not run alongside the motorcycle from under the seat, instead carries an upswept design. The headlamp unit is an all-LED unit and the instrument cluster is mounted right above it. The instrument cluster is a 4.3-inch touchscreen unit. The side displays exposed bits of the chassis and the offset rear monoshock absorber. 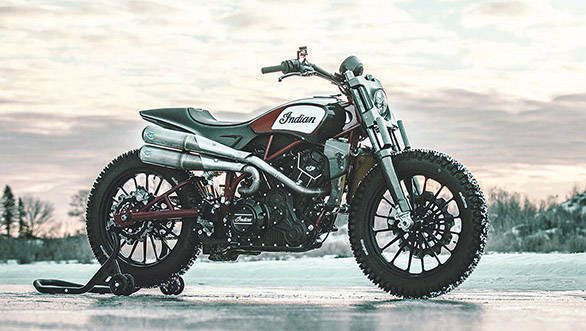