India Baja 2017 to be a Dakar Challenge event

Northern Motorsport, the organisers of the India Baja event, has announced that the 2017 edition will be a Dakar Challenge event. This means that the winner of the rally raid will be given the opportunity to participate in the 2017 Merzouga Rally and the 2018 Dakar Rally, for free. The value of this prize is  20,000 or around Rs 14.05 lakh, which is the registration fee for one motorcycle in these events. While there aren't too many specifics on this as yet, it sounds like it's just the motorcyclists that will be eligible for the Dakar Challenge. However, we'll get more details on this soon. 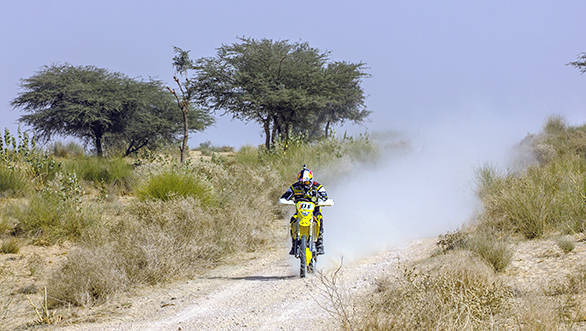 The India Baja was first organised last year as a 24-hour rally raid event. It began from Bikaner in Rajasthan and headed towards places like Noorsar, Nal, Karnisar and Kela covering over 500km in all. Of this distance, 300km comprised of competitive sections. CS Santosh won the Group A motorcycle class and Team Maruti's Suresh Rana and Ashwin Naik won the T1 Xtreme category. While 29 bikes and 32 cars had started the rally, only seven bikes and 10 cars completed it after the six competitive stages. This year, it will be held as a two-day event which will start from Jaisalmer on April 8, 2017. Additionally, the organisers were quite keen on bringing in international competitors to the India Baja 2017.