The India Baja 2017 came to an end today after the rally covered around 140km of competitive sections held over two stages. Winning the Moto class with a time of 4hr45m22s is Hero MotoSports Team Rally's Joaquim Rodrigues. Taking second place is TVS Racing's Aravind KP with 5hr10m46s, while his teammate, Abdul Wahid Tanveer, takes third with 5hr25m44s. Of the top three finishers, Tanveer is the only one eligible to win the Dakar Challenge prize -- a free entry into the 2017 Merzouga Rally and the 2018 Dakar Rally. His teammate, R Nataraj, was initially in fourth place, but a crash in the first stage of the day, lost him precious time. This gave Sanjay Kumar N the opportunity to take fourth. 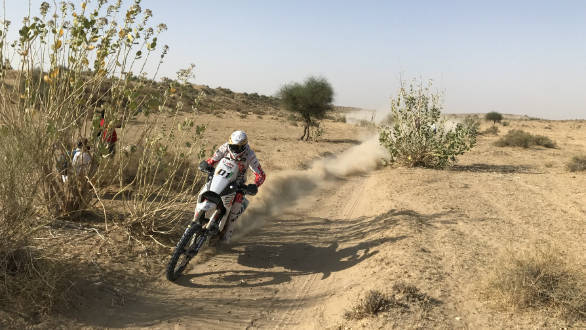 In the Xtreme 4x4 category, it's Gaurav Chiripal and Karan Arya who took first place with a time of 6hr22m22s. Their prize is a free entry into the 2018 Maruti Suzuki Desert Storm. finishing around five minutes behind him to take second is Raj Singh Rathore and Jeevarathinam J. Himanshu Arora and Chirag Thakur take third place in this category with a time of 7hr7m17s.