Kawasaki had showcased the new Versys 650 at the 2014 AIMExpo (American International Motorcycle Expo) where the tourer was given a fresh look to make it look visually distinct from the 2010 model.

The 2015 Versys 650 takes inspiration from the new Versys 1000 and looks significantly different from the earlier version - evident from the fact that the stacked headlights have been given a miss for well laid twin-headlights that sit on a new styled fairing along with a tool-less adjustable large windscreen. The Versys 650 also gets a newly designed more angular exhaust end can. Riders who wish to take the Versys 650 on long road trips as well as on touring holidays will benefit from the new integrated luggage mounting system placed on a new subframe.

There are changes on the foot peg position which has been now lowered by 15mm lower and pushed ahead by 20mm for a more comfortable and laidback riding position. The Versys 650 also gets a fully adjustable upside down Showa SFF fork and a KYB monoshock with remote preload adjustability. The braking system gets new Nissin calipers on the front and the rear with twin 300mm petal-style front discs and a larger 250mm rear rotor. In Europe, Kawasaki offers the sports tourer in four versions  Versys 650 Tourer Plus, Versys 650 Tourer, Versys 650 Grand Tourer and Versys 650. The difference among these variants is between the luggage and auxiliary illumination specifications.  Kawasaki offers the 2015 Versys 650 with ABS as standard. See our launch story here. 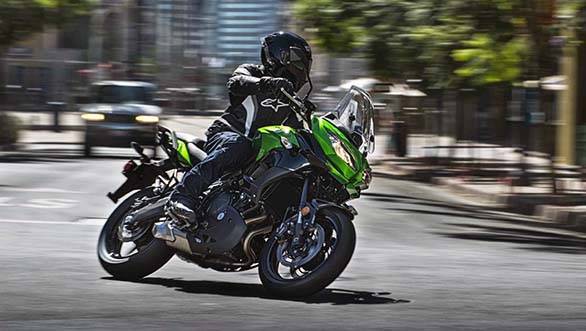 New styling gives the Kawasaki a sportier character. Kawasaki replaced the earlier stacked headlights design - distinctive but not pretty - with Versys 1000 inspired aggressive design. Scaled down fairing looks more proportionate than on the 1000 though - win! 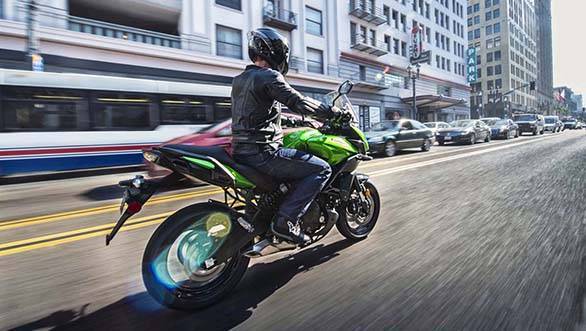 For 2015, the Kawasaki Versys 650 gets completely new rear bodywork. Under that is the new subframe, which was designed to carry more weight - pillion or luggage 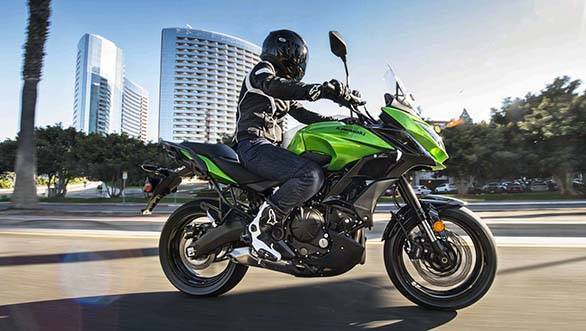 The stacked headlights have been given a miss for well laid twin-headlights that sit on a new styled fairing. See the two black knobs on the bottom of the clear screen? Those are screws you loosen so you can move that screen through a 10cm range of adjustment. It's tool-less, quick and very effective 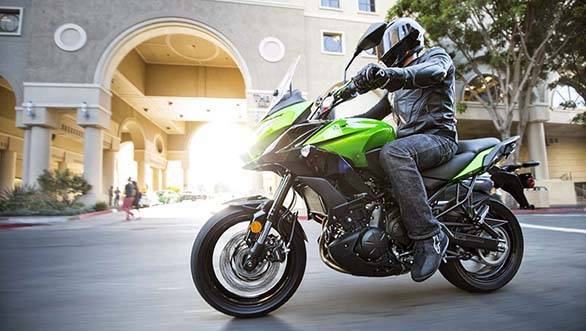 The Versys 650 rides on road-biased 17-inch wheels. As in it might look like an adventure tourer in shape and form but it really is a on-road tourer by intent and design 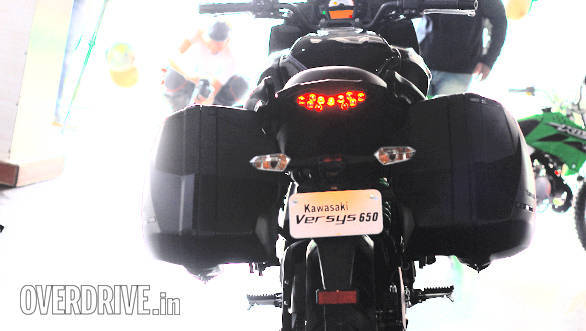 The Versys 650 is only available in one model and in one colour - black - in India. These plastic panniers, though, are available to purchase from Kawasaki. Should be about Rs 90,000 a set. They integrate very neatly into the machine, leaving no unsightly metalwork behind when removed 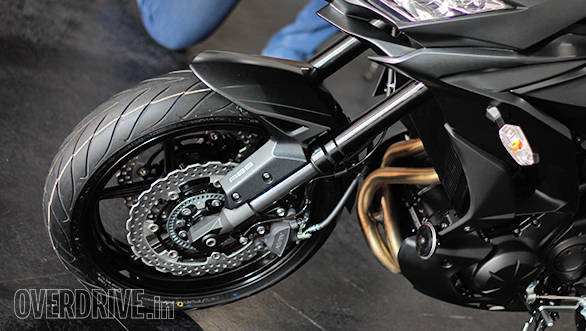 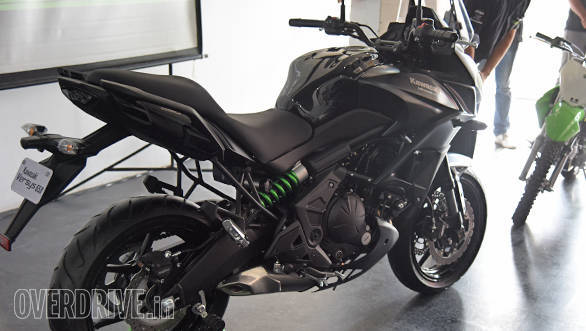 The footpegs on the 2015 Kawasaki Versys 650 have been re-positioned for an upright all day comfortable riding position. This helps with better shifts and riding comfort. Riders can take it over uneven undulations with great ease 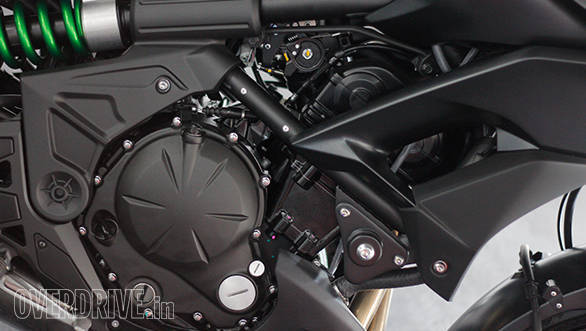 The Versys 650 is powered by the same 650cc engine but has been tweaked for better fuel efficiency and more mid-range torque. The 6-speed gearbox is identical to the Ninja 650 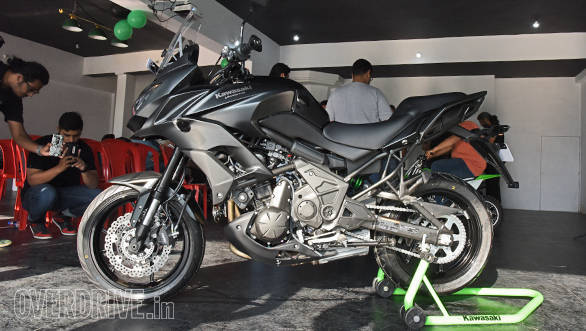 The current Kawasaki India manufacturing facility has a line each for the assembly of engines and frames respectively for their CKD models. Plant has a production capacity of 5,000 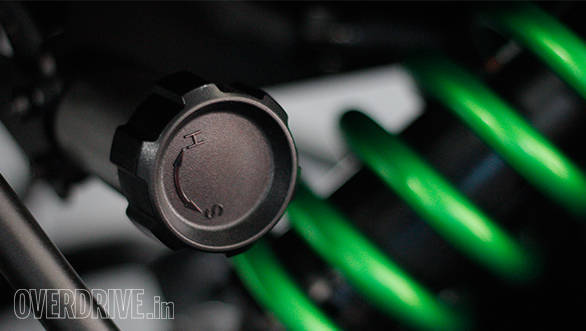 The rear suspension of the Versys 650 gets remote adjustable spring preload. This helps the rider make changes according to the condition i.e. riding alone, with a pillion or with luggage without needing any tools 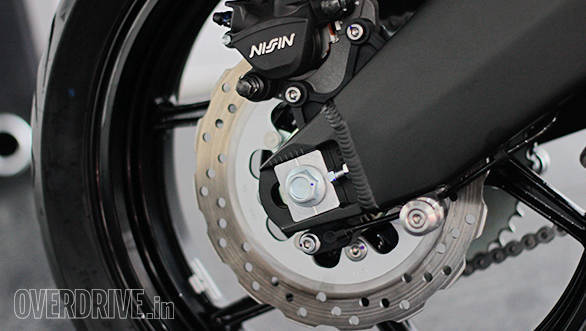 The 2015 Kawasaki Versys gets new 250mm petal style rotor with single-piston calliper and ABS. The bigger disc at the rear comes into play when the bike is fully loaded and is carrying more load on the rear wheel 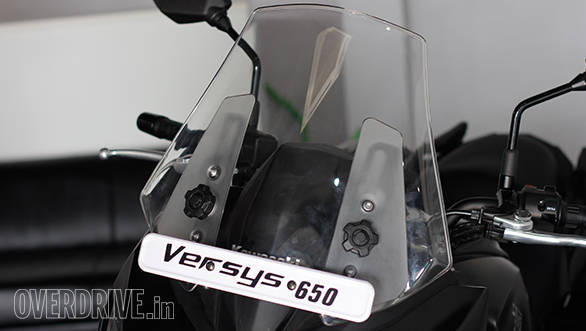 The large front screen of the Versys 650 has a tool-less adjustment. Comfortable for riders between 5'7'' and 6'4'' 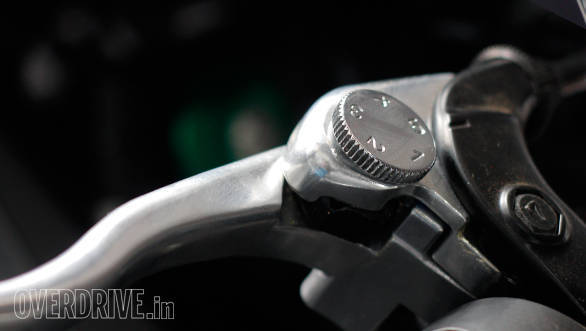 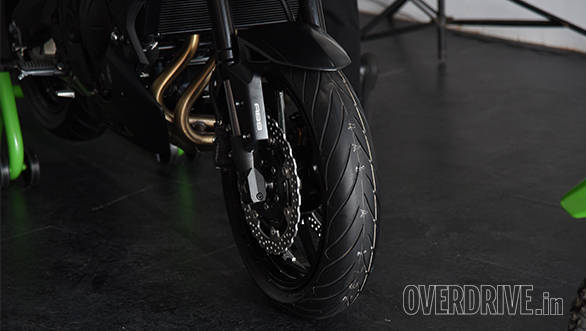 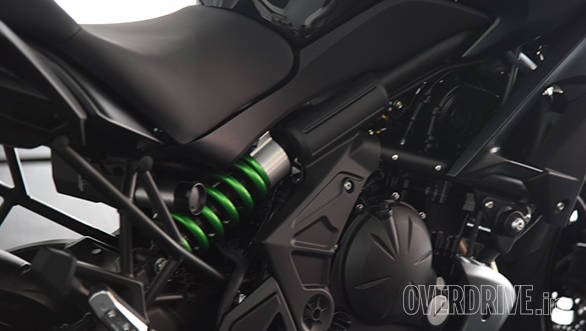 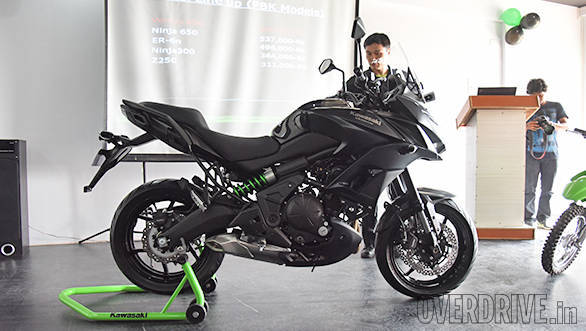 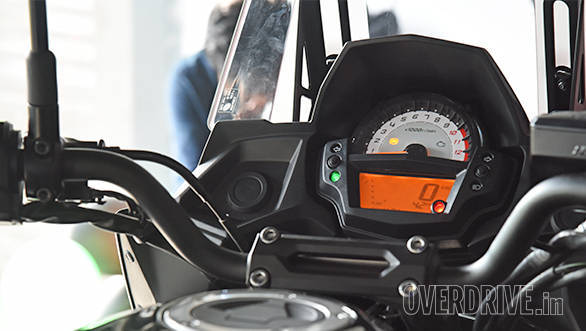 The Kawasaki Versys 650 will be imported in the form of CKD kits from Thailand and will be assembled at Bajaj's Akurdi plant. The clear meters are a new design for the 2015 model but do not include a gar position indicator 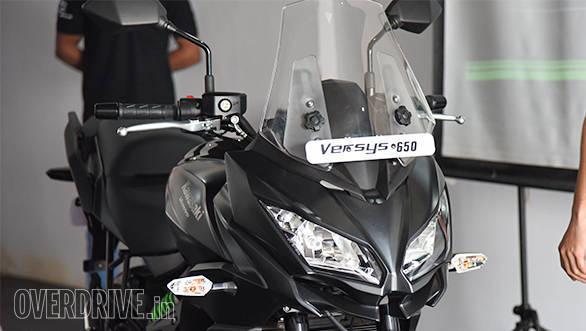 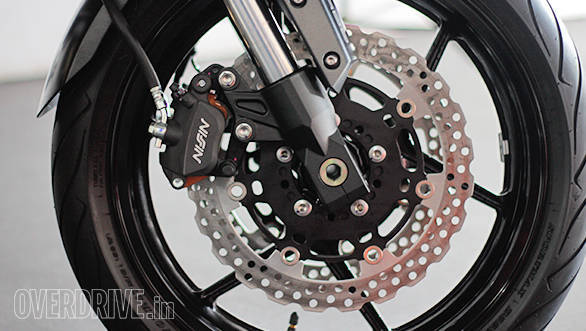 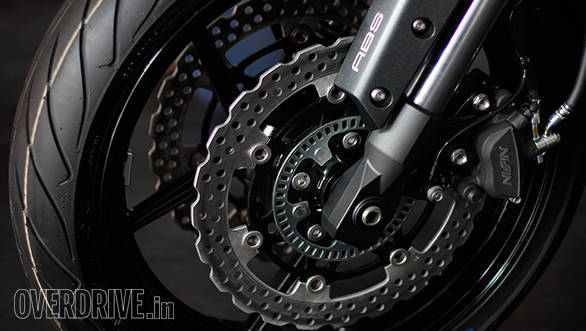 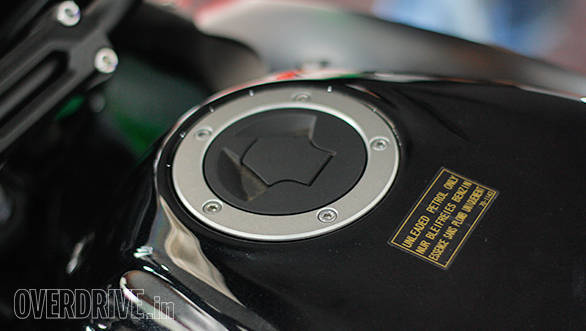 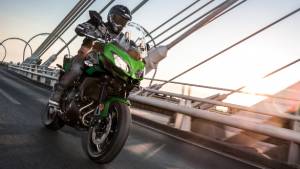 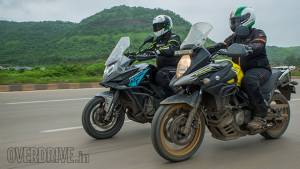