Countless forums, discussions, debates, conferences and briefs have been held with one recurring theme  the energy challenges we face, present and future. There is a general consensus about the role the evolution of technology has to play in meeting our needs. Governments are imposing restrictions on manufacturers and OEMs to comply with fuel efficiency and emission norms.

Manufacturers are exhausting solutions for making the immediately available technology (Internal Combustion Engines) more efficient, while widespread acceptance of alternative solutions (alternative fuels, hybrid and electric powertrains) is limited largely by lack of infrastructure and general perception. As any panel will tell you, the IC engine is here to stay and the immediate necessity is to make it as efficient as possible. As a result there is another chronic reality that is surfacing  the rise of the ancillary industries like lubricants to the very forefront. In fact, manufacturers and OEMs are roping in manufacturers of oil and lubricants in early stages of product design so that they can design parts and assemblages to ensure maximum effect of the lubricant. 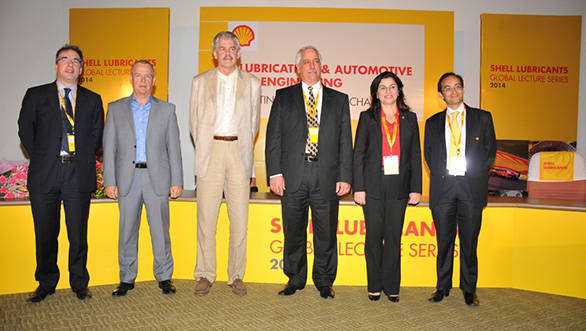 And that  co-engineering  and the effect of lubricants was the theme for the third edition of Shell's Global Lecture Series held at the Indian Institute of Technology, Madras, as Dr. Selda Gunsel, Vice President of Shell Global Commercial Technology and one of the speakers at the event iterated: "At Shell, we believe lubricants - alongside new fuel and engine technologies - have a unique and vital role to play in meeting the global energy challenge. Our research shows that fuel economy can be improved by using the most suitable quality lubricant for an engine, and that even higher savings can be achieved when the lubricants provider and the automotive original equipment manufacturer, or OEM, work together to develop bespoke products for a particular vehicle. This involves long-term co-engineering projects within the industry."

Experts on the panel included the legendary Gordon Murray, known designer of multiple Formula One Championship winning cars, the-then fastest production car in the world  the McLaren F1, amongst others. Murray's association with Shell has been age old but their partnership with Gordon Murray Design's latest revolution  the T.25 City car, is of utmost significance. The T.25 is a city car designed to have world-leading efficiency and ultra-low emissions, and Murray claims that their co-engineering with Shell resulted in overall improvement in fuel efficiency figure of the T.25 by about 6.5%. Present on the panel were representatives from OEMs and manufacturers like Tata Motors and TVS Motors who also emphasized the role of lubricants and additives in helping them meet the existing and future emission and efficiency norms set by the Governments.