Back in 2012 at the Paris Motor Show, Hyundai first unveiled their World Rally Championship version of the production i20. They had then announced that the i20 would be the car that would take to rally stages for the 2014 season of the championship, marking the Korean manufacturer's entry into the world of international rallying. Now, with the Rally Monte Carlo, the first round of the 2014 season, around a month away, the team has finally revealed their 2014 car, complete with new livery, sponsorship and driver lineup too. 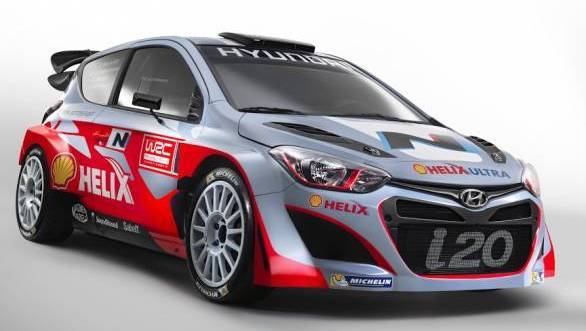 Perhaps the most significant announcement that Hyundai made at the Offenbach unveil of the final version of their WRC i20 was the fact that Shell would partner the Korean maker in their WRC venture. The rally team will be known as the Hyundai Shell Helix World Rally Team. This also marks the return of Shell to the WRC. Remember back in the day when the Shell logo appeared on the rally Peugeot 205 that yumped across rally stages? Well, seeing the Shell logo back on rally cars is enough to give any rally fan goosebumps.

Of course, there were more important announcements made as well. While Thierry Neuville has been revealed as the man who will lead Hyundai's WRC charge from inside the car, the team has also revealed that Dani Sordo, Juho Hanninen and Chris Atkinson will drive the second car at various rallies. It has already been confirmed that Atkinson will pilot the car at Australia, his home rally.

The challenge of leading the team's WRC efforts hasn't daunted Neuville, though. "I am really excited at the prospect of helping Hyundai Motorsport to integrate itself into the tough WRC environment," said the French driver. "It is an honour to be representing a manufacturer like Hyundai Motor Company but also to have the extra responsibility of leading the team in our first season. I am looking forward to Monte Carlo. I can already feel the professionalism, motivation and passion of this team so although it will be a steep learning curve, I am sure it will be a positive one." 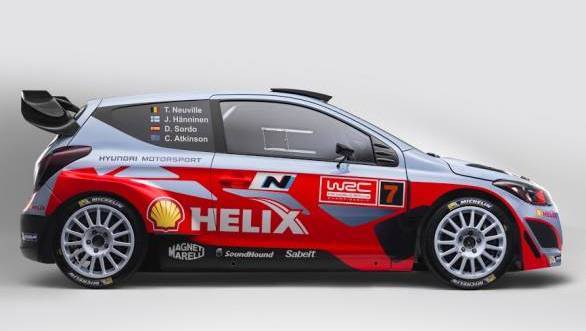 Neuville, Sordo, Hanninen and Atkinson will be the drivers behind the wheel of the WRC i20

Meanwhile, Michel Nandan, the Team Principal of Hyundai Motorsport GmbH declared that the team had worked extremely hard towards the launch of their new WRC team. "In less than one year, we have built and tested a brand new WRC-specification car, the Hyundai i20 WRC, and established a professional team and modern motorsport facility. It's a huge accomplishment but we know that we have a lot to learn in our first season." Nandan went on to declare that their aims for the 2014 season were realistic: "We want to finish each rally with both cars and build up a database of information and experience so we can develop ourselves into prospective rally winners in the future. If all goes well, we will hope to be competing for occasional podiums as the year progresses."

The manufacturer also unveiled their new 'N' range of high performance cars, where 'N' stands for Namyang, the R&D centre where the boffins at Hyundai come up with the latest technological advancements that can be used in the company's motorsport and production car applications.