Hyundai Motor India Limited, which is headquartered at Sriperumbudur, Tamil Nadu, contributed to flood relief operations being carried out in the state by handing over a cheque of Rs 2 crore for the Chief Minister's Public Relief Fund (CMPRF).

Hyundai's CSR division, the Hyundai Motor India Foundation, is also carrying out relief operations at the company's Sriperumbudur headquarters. While their prime focus right now is on distributing food, basic amenities and clothing to the affected areas, they're looking to set up sanitation and medical camps too.

The currently flood-stricken Tamil Nadu is home to a number of automobile plants and headquarters, including Royal Enfield, BMW, Ford, Renault-Nissan and Yamaha. A lot of these had even suspended production as a precautionary measure. While most manufacturers are trying their best to get their production back on track, it remains to be seen how much damage is finally incurred due to the halt in production. Especially since all rail, road and air transport in and out of Chennai has been seriously hit. 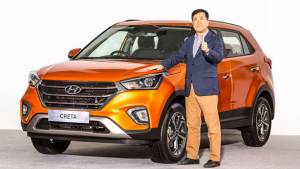