Honda Amaze facelift to be launched in India on March 3, 2016

Honda Car India will be launching the new Amaze on March 3, 2016. The Honda Amaze facelift takes on the design language seen in the spy shots of the Brio and the refreshed Mobilio in Indonesia.

The big chunk of chrome seen on the current Honda City's grille makes its debut in the Amaze as well. The bumpers are new and so are the fog lamp nacelles. There are a new set of alloy wheels on offer as well while there are no changes to be expected towards the rear of the car. Inside, the upholstery is expected to be similar to the new Mobilio with a bigger touchscreen infotainment system and use of chrome for the AC vents. 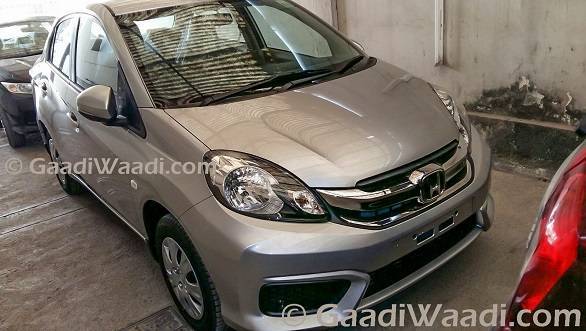 Honda's sub-4m compact sedan has had no big updates since its launch in 2013. Last year, Honda gave the car a touchscreen system with navigation and power folding mirrors. The Honda Amaze is offered with a petrol and diesel engine with the former also getting an optional automatic transmission. Compared to this, the Amaze's competition- the Dzire and Zest both can be optioned with a diesel automatic. A CNG option also was added to the lineup last year but if reports are to be believed, it has already been discontinued.

It remains to be seen if Honda follows Maruti's cues by offering optional safety features right from the base trim or set a precedent by making them standard across the range.