Hesketh will produce its first all new motorcycle after about 30 years. The Hesketh 24 bike is inpired by the Hesketh 308 F1 car which James Hunt drove when he won Dutch GP in 1975. 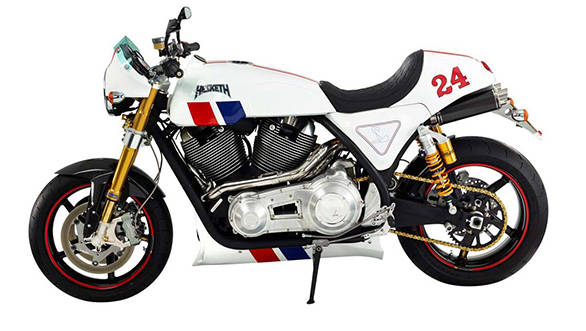 The number 24 comes from the number on Hunt's 1975 F1 car. And, as has happened with all limited edition stuff, the number of models built will be, you guessed it, 24. The tank top will carry the number of each bike covered in 18 carat gold. The company says that the 24 is a modern interpretation of the Hesketh for today's market. 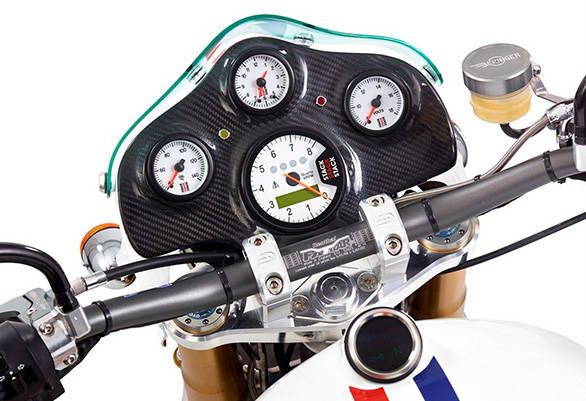 The bike has a 1950cc V-twin engine which is tuned for higher torque. This engine also does duty on the Morgan three-wheeler. Hesketh says that they will provide at least three different tunes for this engine and Harris Performance Engines will provide stage engine tuning of preferred power.

The bike will be hand-built in Surrey and will be serviced by the Hesketh team itself. The bike will debut at the Goodwood Festival of Speed.

The release of the limited edition Hesketh 24 marks the beginning of a bright new chapter in the history of this famous British marque.

As the first all-new Hesketh model to be produced in some thirty years, the exclusive Hesketh 24 celebrates the marque's impressive roots in Formula 1 with Hesketh Racing and their famous driver James Hunt. Taking inspiration from the Hesketh 308 F1 car that Hunt drove to victory in the 1975 Dutch grand prix, the Hesketh 24 will once again prove passion for engineering excellence and quality can achieve outstanding results.

Under new ownership and management, Hesketh Motorcycles Ltd has shown in the production of the new 24, just the beginning of plans to establish a British motorcycle company with a reputation for quality, luxurious, hand-built machines.

Named after the number on James Hunt's 1975 F1 car, this new model will be limited edition with only 24 built and on sale internationally. Developed and designed by Paul Sleeman, Hesketh Motorcycles owner and chief engineer, the 24 uses only top quality components and has been painstakingly built with attention to every detail. The vision behind the Hesketh 24 was to produce a modern interpretation of what a Hesketh should be in todays' market. Retro styling coupled with modern technology, the Hesketh 24 balances the style, quality and luxury of the original bikes, but with the technical excellence and reliability that the marque deserves.

The heart of this new model is undoubtedly the substantial 1,950cc V-twin S&S X-wedge engine, offering an undeniably high amount of torque. Air-cooled and with a proven power-train, the meaty V-twin was chosen for its excellent reputation and reliability. In a unique twist the X-wedge is also the engine used for the quintessentially British Morgan three-wheelers  a British icon using a proven American motor goes to show the quality of X-wedge.

Modifying the engine especially to suit the Hesketh 24, the team turned to expert British tuners, Harris Performance Engines, putting to good use their forty years' experience in pushrod engines and drag racing to produce the exceptionally powerful 24 engine.

The Hesketh 24 bodywork is in the unmistakeable colours of James Hunt's Hesketh F1 car with graphics designed and produced by none other than BSB champion, Tommy Hill. In fact Tommy will be the first person to ride the Hesketh 24 in public at the 2014 Goodwood Festival of Speed as he takes the new model up the famous hill-climb.

Dripping in brand-name components from the likes of Öhlins, Beringer and Baker, the Hesketh 24 uses only the best of the best  offering unbeatable luxury and exclusivity.

For example the seat is made from the finest Italian nappa leather. Fully waterproof and super-soft the seat is the work of F1 class leather upholsterers, d:class, who have already put their name to the seats of McLaren.

Each of the limited edition Hesketh 24 models will feature an 18 carat gold plaque on top of the tank with the unique number of that particular model. Along with the knowledge that each bike has been hand-built by Hesketh technicians at their Surrey headquarters.

Hesketh 24 owners will enjoy full-service back-up from the Hesketh team with a comprehensive two-year warranty as standard. To own one of the exclusive Hesketh 24 models is to own a piece of modern history and a piece of the unique story of Hesketh.

Why the Historic Monaco Grand Prix should be...
Advertisement