The 2016 Oilibya Rally Morocco is the last of the preparatory events that the Hero MotoSports Team Rally outfit will get to compete in ahead of the 2017 Dakar Rally. And the event kicked off in Agadir with a seven kilometre prologue stage. Both riders, put in solid performances, with Joaquim Rodriguez finishing 12th overall, and CS Santosh ending the day in 26th place. At the head of the order, it was KTM's Toby Price who finished first. 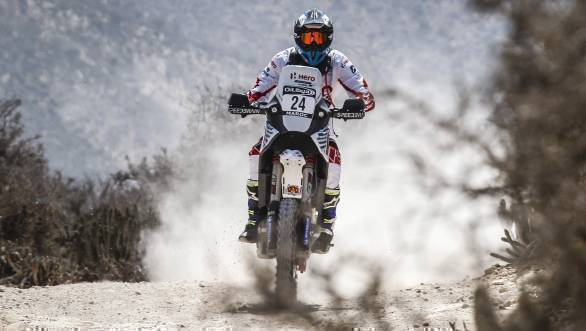 Said Santosh of the prologue. "I knew I had to get through it without any problems. That's what I tried to do. I made a small mistake a few hundred metres into the stage. I recovered after that and caught another rider. Today was just a five-minute dash and I can't really complain. We'll see where we can progress when the rally really starts."

"Both our riders have enjoyed a proper start," commented Team Manager Wolfgang Fischer. "There was some dust, other than that our riders had no problems. It's good to see J-Rod in the Top 15 and also CS is in a decent position. Everyone here at Hero MotoSports Team Rally is looking forward to the first desert stage."

Today, Santosh and J-Rod face the real rigours of the rally, with the 120km long opening stage called the "Loop of Agadir" to contend with.