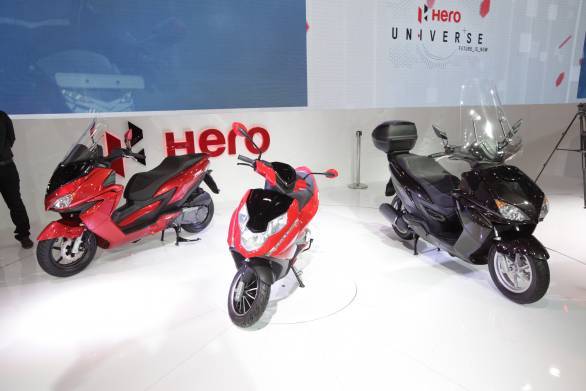 Today Hero added to their already growing portfolio of concepts three new scooters that look sure to shake up the scooter market when they are launched.

This scooter will mark the entry of Hero into the 125cc market and is aimed are the urban male who is looking for a more powerful alternative to a regular twist and go. The Dare will feature a 125cc force air cooled, 4-stroke single that makes 9.5PS and 9.5Nm of torque. It will also sport telescopic forks, alloy wheels and a front disc brake that should make for a sporty handling scoot. In addition to a mobile charger and side stand indicator as in the Dash, the Dare will also sport an all digital meter and LED daytime lights.

Heading the charge in the Hero MotoCorp scooter stable is the stunningly styled Zir, a 150cc scooter that aims to bridge the gap between scooters and motorcycles. The Zir will be made in two variants, one with a more conventional flat floor board while the other will be a European style step through model. Both will be powered by a new 150cc liquid cooled 4-stroke engine that makes 14.2PS and 1.7Nm of torque. It will also feature front and rear combined disc brakes. The Zir will have a large 9-litre fuel tank that will give it a respectable range for long distance commuting and Hero claim the engine is capable of a top speed of over 100kmph.

the recently unveiled Dash will be powered by an 110cc 4-stroke engine that makes 8.5PS and 9.4Nm of torque. This feature packed scooter is aimed at the young urban commuter and will come with utility features like a fuel lid that can be opened with the ignition key, a side stand indicator, USB mobile charger and a service due indicator. It will also feature LED taillights, digital analogue meters and a coded security key.

The Zir and the Dare are scheduled for a mid to late 2016 launch while we expect the more conventional 110cc Dash to make an appearance some time in 2015.