Hero MotoCorp has set up an SAS subsidiary in Colombia. The commencement of construction of its new manufacturing facility in Villa Rica at Cauca, Colombia has also been announced. This facility will be functional by mid-2015 and is expected to roll with an initial capacity of 78,000 units with Phase II ramping capacity escalating to 1,50,000 units. Once the plant is operational, Hero will become the first Indian manufacturer to have a production facility in latin America. 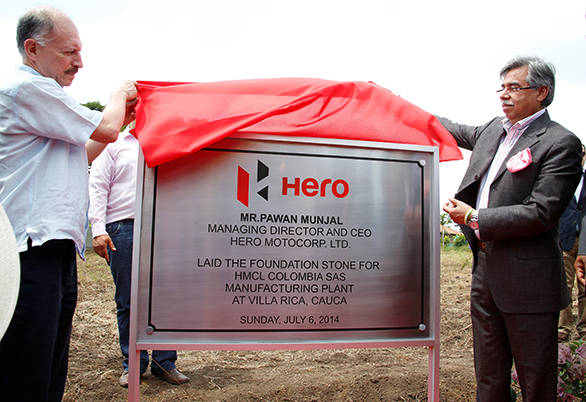 Pawan Munjal, MD and CEO, HMCL and Temistocles Ortega, Governor of the state of Cauca, at the commencement of construction at Hero's plant in Colombia

Hero has lined up an investment of 70 million US dollars for the project, with 38 million to be used in Capex while the rest will be utilised over the next three years as working capital. The company aims to establish itself in as many as 50 countries by 2020 and cross the 100 million units mark. Currently the company has outlets in 19 countries including Africa and South America.

Pawan Munjal, managing director and chief executive officer, Hero MotoCorp Ltd said, "With the setting up of the state-of-the-art world class plant here, we will bring the latest modern technology into the country. As we grow our dealer network and localise our operations, we will generate immense direct and indirect employment, thereby contributing to the overall development of Colombia."