If you thought Harley-Davidson has never had liquid-cooled engines, you'd be forgetting the V-Rod engine which is liquid-cooled and famously developed with help from Porsche. However, H-D has always shied away from introducing obvious new technology in its more traditional V-twins, the 45 degree behemoths that power most of its range. Obvious, in the sense that of being on display and clearly showing Harley owners that the Milwaukee company is moving on from pure nostalgia and image to better, more current technology.

The flipside of this resistance to change is simple. Every year emissions norms get tighter and it becomes harder and harder to keep the same level of engine performance while lowering CO2 and other emissions. The engineering solution is to allow the engines to run leaner, make a bit more power perhaps to keep progress going but this also means engines have to find greater and greater thermal stability to be able to carry on doing their jobs. And that is where a legacy-sourced block on how to cool engines can be an issue. 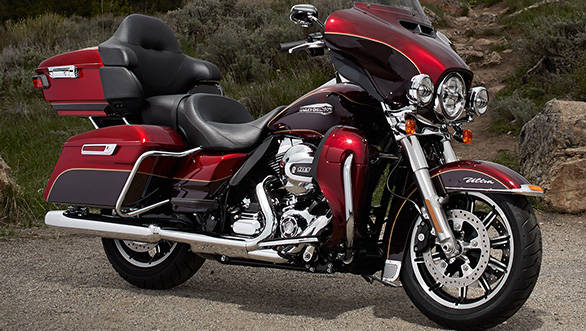 BMW Motorrad recently tackled the issue by part-liquid-cooling their iconic R 1200 GS and now Harley-Davidson are taking more or less that same path with their new "Twin-Cooled High Output Twin Cam 103" engine. 103, of course refers to the displacement in cubic inches and that means 1688cc in our terms. The engine, which we will call the TCHOTC from here on gets a new camshaft and a higher-flow airbox and Harley says this will boost low-end torque. How much? As much as 5 per cent and Harley says roll-on acceleration between 100-130kmph in a gear as high as fifth shows a dramatic improvement even with a fully loaded motorcycle. Harley also say the new airbox design improved both airflow around the rider as well as legroom  the air cleaner sticks out less and that should allow a more comfortable leg position on almost all models wearing the new TCHOTC.

But the big change, obviously is the liquid-cooling. Like the BMW, the liquid-cooling isn't for the whole engine and the block and bottom carries on more or less as is. The fins are fully functional and part of the air-cooling setup. What is added are water jackets that circulate coolant around the hottest part of the engine, the exhaust-related parts of the head. The radiator is mounted as subtlely as possible between the twin downtubes of the frame. The liquid cooling allows the compression to come up to 10.1:1, one of the reasons for the extra torque. An electric pump manages the coolant circulation and Harley says the heat from the engine the rider normally feels on air-cooled motors will be significantly reduced by the part liquid cooling as well. 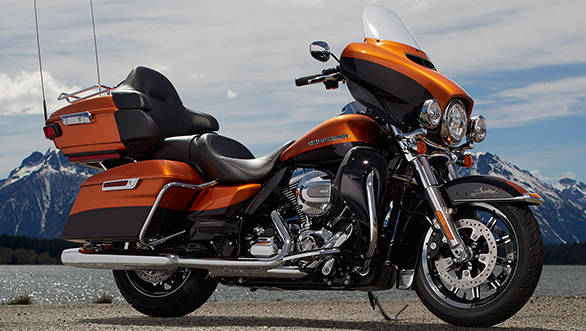 Harley also announced Project Rushmore, an initiative to be more responsive to customers. The project has led to forks getting larger (49mm now, up from 43.1mm) and more stiff. Harley is also adding what their call "Reflex Linked Brakes with ABS" as standard on some models and optional on others. The system connects the brakes between 32 and 40kmph. Lower speeds or higher speeds allow the brakes to operated independent of each other. Harley says the system manages the balance between the front and rear brakes while ABS is always on alert to stop wheels from locking.

Harley also announced a new fairing and luggage all of which are improved thanks to Project Rushmore. Finally, H-D will also upgrade on-bike infotainment systems to add touchscreen controls. voice controls and more.

So which bikes get these new bits? The TCHOTC will become standard on the Ultra Limited and Tri Glide Ultra models, plus the CVO Limited. All of these are available here as CBUs. The last three will also boast standard linked ABS brakes while the Road King and Street Glides will offer them as factory options.

Harley's changes all aim for their touring models and we believe should improve the open road experience quite a bit. Will the traditionalist Harley rider community take to liquid-cooling? We believe the time when something like this would put people off en masse has passed.