Harley-Davidson India has opened new dealerships in Pune and Goa and added a second facility in Mumbai, taking their total number of showrooms in India to 13. The Pune dealership is situated at the Amanora Town Centre Mall, which recently hosted the India Superbike Festival 2013.

The Milwaukee-based premium two-wheeler manufacturer has dominated litre-class cruiser segment in India, and has even opened a CKD assembly facility in Bawal, Haryana. Last month, H-D confirmed that it will manufacture the Street 750 and Street 500, motorcycles based  on its newly developed Street platform, in India.  The Street 750 will be launched in India at the upcoming Auto Expo 2014 in February, and will be priced under Rs 5 lakh.

Anoop Prakash, MD of Harley-Davidson India, and Sunil Christian, dealer principal of Two Rivers Harley-Davidson, were at the opening ceremony. Also making their presence felt at the inauguration were more than 100 Harley owners from all across the western region. Harley-Davidson India says that it is focusing on the region considering the popularity of H-D motorcycles there.

Pune has been a growing market for the brand, and earlier, owners and enthusiasts had to ride to Mumbai for purchase or service. All this changes with the opening of the new dealership and the Harley owners in and around Pune now have an authorised point-of-contact closer home. 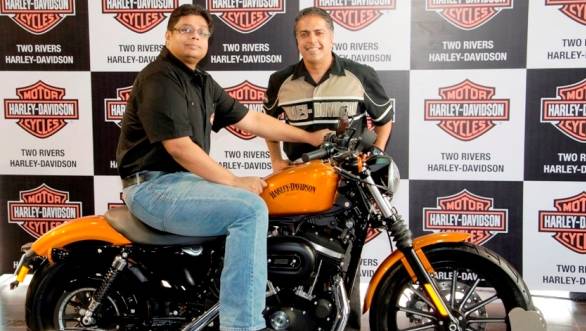 Sunil Christian (on the Bike) with Anoop Prakash

The company says that it has sold around 4000 Harleys in India since the official beginning of retail operations in India in 2010.

The Two Rivers dealership has on offer the entire Harley's India lineup of 11 models, in addition to authentic riding gear, apparel and merchandise. Owners will also be able to choose from a range of genuine parts and accessories to customise their bikes. The motorcycles are available at a starting price of Rs 5, 91,000 (ex-showroom, Pune). Other than Pune, Mumbai and Goa, Harley-Davidson has dealerships in Indore, Hyderabad, Kolkata, New Delhi, Chennai , Chandigarh, Ahmedabad, Mumbai, Bangalore and Kochi.

Harley Davidson's bolt out of the blue and...

Hero MotoCorp has sold over 8 lakh units in...
Advertisement