Terry Grant is one of the most famous and talented stunt drivers alive. He has a huge slew of records to his name and has just added another one at this year's Festival of Speed. Get this, crews drove a Nissan Juke Nismo RS up the entire hillclimb course on just two wheels, corners and all! You have to watch the video to appreciate the insanity of it where you can see Grant making sharp and precise steering inputs to keep the car on the balancing point as well as steer it through the narrow course with all of its curves. 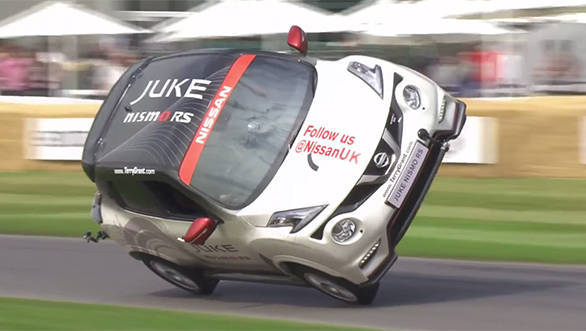 Grant did the run at a pretty brisk pace too, taking just 2 minutes and 10 seconds to cover the 1.87km course which means an average speed of close to 50kmph. This record is significantly quicker than the 2 minute-55 second-rub Grant set four years previously at the FoS. After setting the record, Grant said that he'd be back soon to try and break it one more time!

Nissan also used Goodwood to showcase the new Juke R 2.0. For those of you who don't recall, Nissan unveiled the original Juke R in 2011 -  a frankenstein car which was a Juke body based on the 545PS Nissan GTR drivetrain. Originally a concept, Nissan actually put it into limited production although at an exorbitant price. The Juke R 2.0 features revised body work with fresh bumpers and lights. But the bigger news is that it now gets the drivetrain of the higher end Nismo GTR which means it now has a monstrous 600PS at all four wheels. Nissan hasn't said anything yet about how many cars will be made or how expensive they will be.

Electric vehicles - Why they don't have a...
Advertisement