Nissan has unveiled the new Juke at Geneva Motor Show. The radical crossover has undergone a host of exterior and interior changes with more personalization options than before. The price has not been announced yet but the car is expected to go on sale from summer 2014 in UK market.

The design of the Juke still looks bold and different than its rivals.  The front gets redesigned upper lamps and bi-intensity LED daytime running lights. The headlamps now have Xenon bulbs for better visibility. The bumper also has been reworked to give a more beefed up appearance. The side gets revised LED side indicators with 16-inch alloy or steel wheels coming with the base Visia model and the top end Acenta and Tekna variants getting the option of 17 or 18 inchers. Owners can also customize their vehicle with new personalization packs to change the look of the wheels and other design elements. The Juke is available in ten colours with three new additions to the palette. 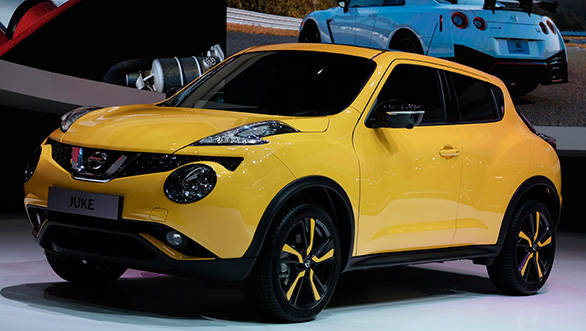 Interior in the standard variant gets a grey theme and if you choose a personalization pack coloured, accents can be added to the door trims, centre console, A.C vents etc. The seat upholstery is offered in two styles: comfort and sport. The top versions will get leather trims as standard. The Juke offers more cargo hauling capabilities especially in the two wheel drive variants which get 40 per cent more space up to 354 litres. The luggage space gets more flexible with two-stage floor luggage area and flat foldable rear seats.

The new Juke has a total of three engines: two petrol plants and one diesel. A new 1.2litre turbo-charged DIG-T petrol engine produces 115PS and 190Nm of torque and features Stop & Start technology. This engine is claimed to have an emission of 126g/km and fuel efficiency figure of 18.1kmpl. The other petrol engine which has been carried over but with extensive revisions is the 1.6litre DIG-T petrol unit. It now has improved low friction technologies and cooled exhaust gas recirculation. This unit generates 190PS of power and is claimed to give emissions of 139g/km in the 2WD trim. The only diesel engine is the 1.5litre dCi unit capable of producing 110PS. Transmission options are a six speed manual or Nissan's Xtronic CVT box for the 4WD. The 4WD version also gets Torque Vectoring for improved four wheel drive capabilities.

The Juke gets features such as Around View Monitor four-camera parking aid and opening sunroof. NissanConnect is the car's infotainment system and is accessible via a 5.8 inch colour touch screen. The system also has Bluetooth audio streaming, mobile phone integration and aux-in, USB slots. 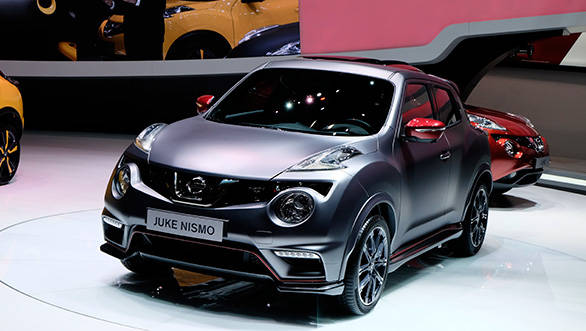 On the sidelines of the new Juke unveil, Nissan's Nismo unit has unveiled a more powerful Juke Nismo RS version of the compact crossover. This car boasts  increased power figures with the 1.6litre DIG-T petrol unit making 218PS and 280Nm of torque with a choice of six-speed manual or paddle-shift Xtronic transmission with eight-speed manual mode. The ride and handling has been enhanced with a stiffened body structure. Sport brakes, large diameter muffler, V-motion grille, RS-badges and optional Recaro bucket seats set it apart from the standard car.

Read all about both the latest offerings from Nissan in the detailed press release below. 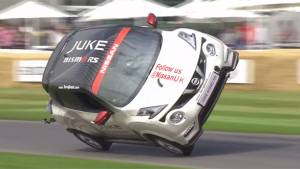