Gautam Singhania became the first Indian to claim pole position in Race 1 of the 2015 Ferrari Challenge Finali Mondiale Coppa Shell Cup, and then went to better that record by becoming the first Indian to win a race  a feat he achieved after leading every lap. He is also the first debutant in the history of this championship to score 10 podiums with one race to go. 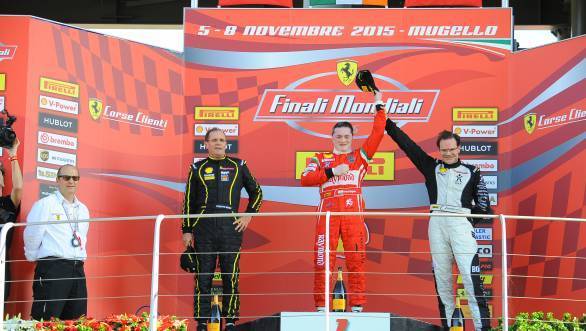 Singhania, backed by the Kessel Racing outfit, lapped the 5.2km Mugello circuit in his Ferrari 458 Challenge in a blistering 1:54.377 to claim his maiden pole position, just ahead of championship leader and inevitable champion Jacques Duyver. 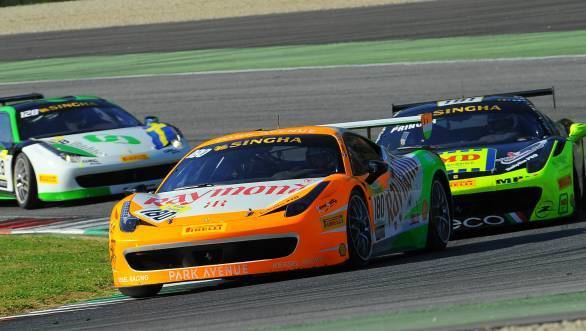 Singhania leads the pack in the tricoloured Ferrari 458 Challenge

Singhania had a good start as the lights went out, but so did Prinoth who moved into 2nd place right behind the pole sitter. As the clock ran backwards from the 30-minute mark, it looked like Prinoth was biding his time, waiting for Singhania to make a mistake. Singhania was relentless and faultless, it was evident by the 20-minute mark that Prinoth had to work and make a move. By the 10th lap Prinoth had moved within striking distance and it seemed as if he had Singhania lined up for a move on the 15th and final corner, but Singhania uncannily found some exit speed and pulled away. From that point on, Prinoth despite his efforts was unable to get close enough to make a move and the Chairman and Managing Director of Raymond crossed the finishing line after 16 laps of intense battling, with Erich Prinoth consigned to 2nd place. Jacques Duyver completed the podium roster coming in 3rd and sealing his championship.

Gautam Singhania has now increased his 3-point advantage to 9 points thanks to an additional point for the pole position and 20 point haul from the race victory.