Frame the Star Day One from Chikmagalur: Praying to the weather gods

It is monsoon time in Chikmagalur, and the participants, Chirodeep Choudhuiri, Giri Cavale and Anil Risal Singh were prepared for unexpected rain, and enthusiastic about going out to shoot. And the weather gods had a few surprises in store. 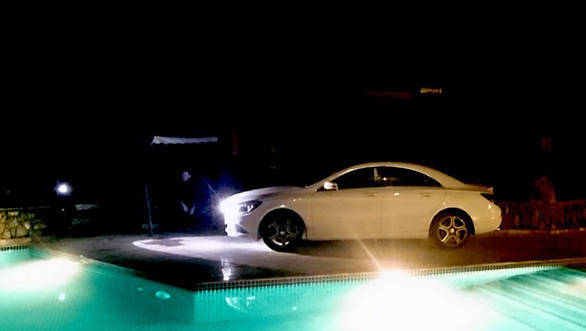 Chirodeep was the first one to wake up, at 5:15 am, only to realise that it was pitch black outside. He hit the road as the sun rose, with the idea to catch some morning mist rising from the valley below. Meanwhile, Giri started with taking the CLA 200 to the lake on the property, and as he was setting up his tripod, he was visited by two unwelcome guests. He discovered a pair of leeches stuck on his foot, but Giri simply ignored them and continued to click until he was satisfied. He didn't want to waste any time, so we hit the road again. However, the weather let him down as he was hoping to find a patch of blue sky to shoot the CLA under, but the overcast monsoon clouds prevented that. Hence, we decided to take a short break by the road and enjoy some excellent filter coffee, while Giri contemplated his next move.

Post breakfast, I joined Chirodeep in the CLA, who decided to go to a grassland adjacent to Devramani temple with a serene lake in front of it. As we started from the resort, the sky cleared up, and we could hope for some good pictures. But the weather gods had other plans. As we reached the hilltop after an hour's journey, we were met by a light drizzle. The lack of an adequate shelter prevented us from taking any pictures. As we were deciding on what to do next, the other participants, Giri and Anil also reached the temple. Rather than go back and return at a later time, everyone decided to wait for the weather to improve. All the photographers and support staff ventured out of their cars with vibrant umbrellas in hand, and the three contestants continued to plan their shots. 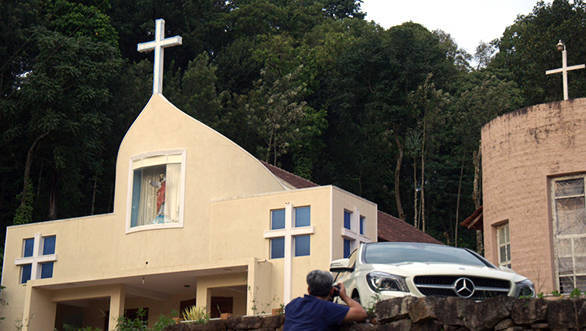 As Giri and Anil moved ahead, Chirodeep found the angle he was looking for and got busy shooting. In the meantime, I was observing everything from the comfort of my CLA 200 and happened to notice a couple waiting in the rain at the entrance of the temple. As I wondered what they were doing there at such an odd time, an old priest walked in with an umbrella and opened the temple gates for them. It now dawned to me that, since the temple is in a remote area it is opened only when some devotee shows up.

We too prayed for better weather for photography, and the gods soon answered our prayers. As the rain stopped, mist followed. Chirodeep and Anil began to make pictures of the CLA 200 in the mist, and I clicked pictures of them from the car. If my pictures are any indication, I am certain that these passionate photographers got some intriguing images.

On the first evening itself  I had seen Anil taking pictures of the CLA positioned right next to the infinity pool at Villa Urvinkhan. He is very passionate about architecture and loves to include design elements and geometrical patterns in his photographs. And quite unsurprisingly, he chose to pair the Mercedes-Benz CLA 200, a bold model, alongside the uniquely designed pool. I'd like to think that the poolside will be a hit among the other contestants to click pictures, and let us see if they are able to come up with some winning shots there.

One of the most memorable moments of the day was when a peacock ran in front of our cars and took off before our eyes, giving me very little time to click his pictures. We wound up the day at a calm little Church close to the main road, and in  the fading light of the day Chirodeep climbed on a water tank to get the point of view he was looking for.

I must add here that to watch these passionate photographers is such a great experience for me. I get to learn just by observing them working, with no worry of rain, food or even the blood sucking leeches in the grass.

I am looking forward to spend time with the next group of photographers tomorrow morning, watch this space for more behind the scene stories from Frame the Contest Face-off in Chikmagalur.

Prasad Np is a passionate photographer who enjoys photographing people, wildlife and travel. He is the author of the travel and photography blog called desi Traveler.  You can connect with him on his Facebook page called desiTraveller and on twitter @desiTraveler