The fourth round of the 12th JK Tyre National Rotax Max Karting Championship concluded this weekend after two days of intense racing action. Saturday was earmarked as the day for practice, qualifying and Heat One. In the qualifying round before the first Heat, Nikhil Bohra from team Meco Racing, Mohammed Nalwalla of Rayo Racing and Ricky Donison of team BPC Racing qualified on pole in the Micro Max, Junior Max and Senior Max categories respectively.

The First Heat provided a glimpse of the racing action set to unfold at the Meco Kartopia track in Bengaluru. Shahan Ali Mohsin , who leads the Micro Max championship, displayed his stunning driving skills as he led the field to the chequered flag. Mohammed Nalwalla was in his element as he took a thumping victory over his rivals in the Junior Max categories. But the drive of the day was by Ricky Donison who was unchallenged to P1. 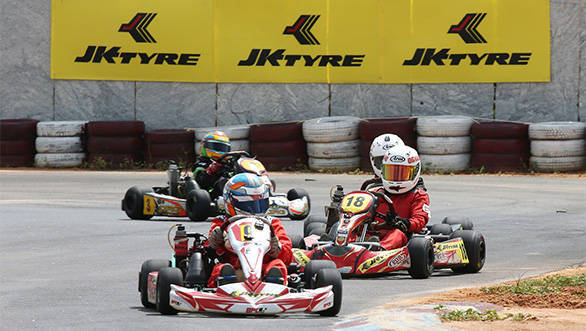 Day Two was even more intense as this was the penultimate round of the 2015 championship. Heat Two of the Micro Max category was won by Shahan again while Mohammed Nalwalla and Ricky Donison sealed P1 for the pre-finals in their respective categories. From their performances this far, it seemed that the trio would clinch victories in the pre-final and final with ease, however, the spectators were in for a few surprises. In the pre-final race of the Micro Max category, Shahan was under constant attack from Nikhil Bohra. The little ones left no stone unturned and were competing flat out. Just before the finish line, Nikhil took a chance and tried to overtake Shahan, but unfortunately, he hit a competitor and was handed a two place grid penalty. In the Junior Max pre-final, Mohammed Nalwalla's championship challenge took a hit since he was forced to retire due to a mechanical issue. Manav Sharma took the chequered flag on first followed by Nirmal Umashankar and Abhirath Shetty. Ricky Donison won the pre-final race too. 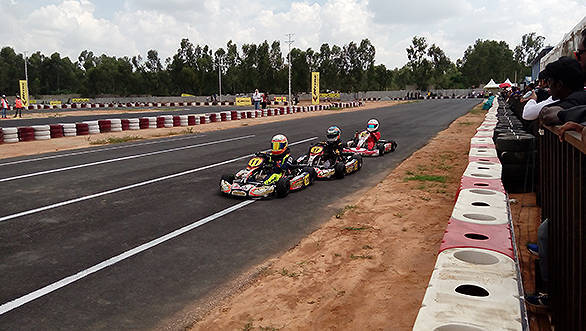 The final races, however, were the best of all. Shahan Ali Mohsin was again under pressure from Nikhil Bohra who followed the Agra boy with barely an inch to spare. Ruhaan Alva, meanwhile, was piling the pressure on Nikhil. The trio gave it all they'd got and slowly pulled away from the rest of the field. Towards the closing stages, Shahan hung on to first with Nikhil right behind him. Ruhaan began falling back. When the chequered flag was waved, Shahan added some valuable points to his kitty by crossing the line in P1. 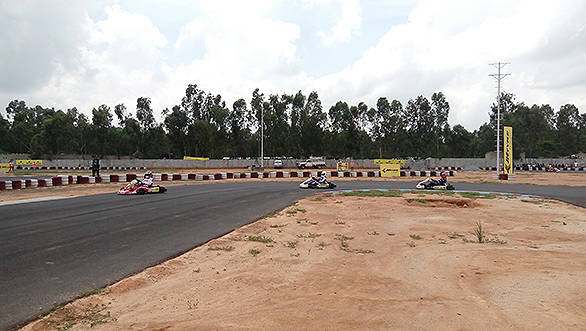 The Junior Max race was a complete entertainer with some thrilling battles up and down the order. Manav Sharma emerged as a formidable competitor as he displayed incredible wheelmanship to cross the line first, followed by Akash Gowda. The star driver of the race was Mohammed Nalwalla who drove like a man on a mission. Starting from last place, the Mumbai boy drove pedal to the metal and rose to third. There was a major accident though during this race, when Akash Gowda and Nirmal Umashankar's karts collided, sending Nirmal flipping towards the tyre barriers. Luckily, he survived the crash with no major injury to him or the kart. 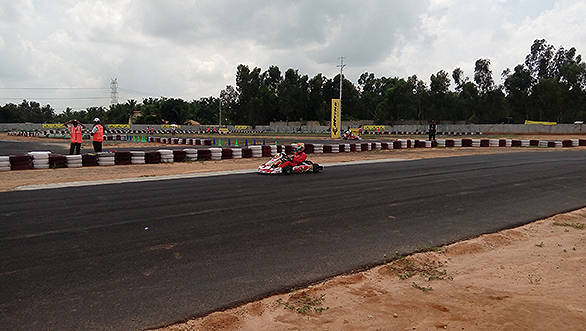 The final race in the Senior Max category was dominated by Ricky Donison of BPC Racing. Starting on pole, he managed to stay out in front as the field entered the first corner. From then on, he kept his head down and began stretching his lead. Nayan Chatterjee and Ameya Bafna, Rayo Racing team-mates were in hot pursuit, but were no match for Ricky's stunning pace. 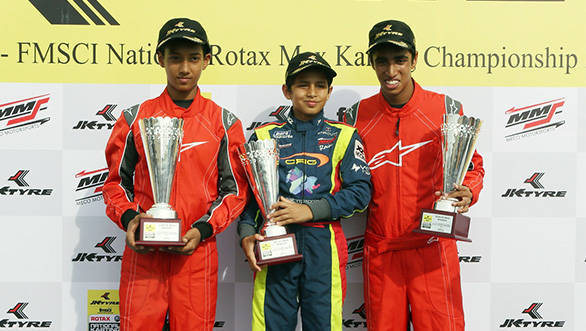 By the tenth lap of the 20-lap race, Ricky was over three seconds ahead of Nayan with Ameya in third. The crowd too watched in awe as Ricky drove as if on rails. He was sewing in apex after apex with precision, an act that saw him take an emphatic victory and extend his lead in the championship. Nayan Chatterjee was second and Ameya Bafna in third brought home a double podium for the Rayo Racing camp.

The final round of the 12th JK Tyre FMSCI National Rotax Max  Karting Championship 2015 will be held at the Meco Kartopia Circuit from October 10-11, 2015.