Reigning Asian Karting Champion (in the Micro Max Category) and double Indian National Karting Champion, Shahan Ali Mohsin, put up quite a fight in the Rotax Grand Festival 2017, to take a fourth place-finish. This, after he had a tough fight in the pre-finals, which ended with him finishing on the podium. 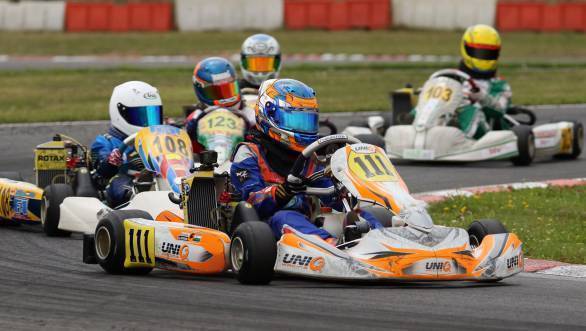 In the Mini Max category, in which Shahan was competing, there were 26 drivers in total from all parts of the world. Shahan was the only driver from India, and was competing in the race for the Uniq Racing Team. The 13 year old began the race weekend strongly, showing top-10 pace during the practice sessions.

In qualifying, Shahan finished in ninth place. Which meant that it took considerable hard work for him to get to the front end of the grid. He managed to finish consistently in the three heats, and followed that up with a fifth-place start-position in the pre-finals. 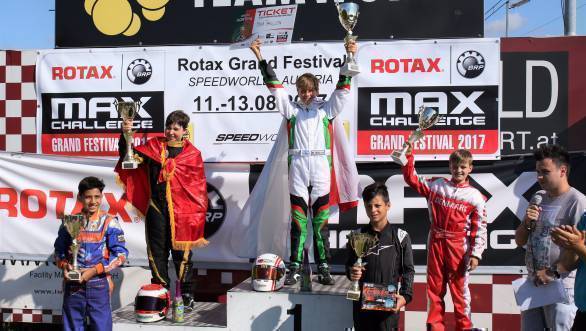 Shahan, in fourth place, with the top five finishers at the Rotax Grand Festival in Austria

The pre-finals began well, with Shahan managing to take one place at the start, and climbing his way through the order as the race progressed. Shahan managed to take third place, after a move on Filip Jenic managed to put him in third place. Which is where, despite considerable pressure from the Austrian karter, he finished.

The final race saw Shahan start from third place on the grid. When the race started, some drivers ended up being quite aggressive, and the race was red-flagged on the first lap. It was restarted 20 minutes later. Shahan did extremely well on the restart, and he managed to pass the driver in second place, Suleiman Zanfari from Morocco, and set off in pursuit of race leader Maximillian Tarillion from Argentina. But a small error on Shahan's part meant that he was forced down to seventh place. Shahan didn't let that stop him, and managed to keep going ahead, slowly picking his way up the order. He managed to make it up to fourth place, but then ran out of laps, ultimately finishing fourth, less than half a second behind third-placed Marius Kristiansen. "It is hard not to be disappointed after pace we showed in the pre-final and the finals because we were surely in hunt for the victory, nothing less. Despite the recovery, it feels like something had been taken away from us", said a slightly disappointed  Shahan.

"We were the first finisher (sic) with the long chassis setup with 1-2-3 place finishers driving a short chassis. For sure there was some advantage for the short chassis in the quick chicanes where a fast direction change was needed; so classifying them together may have been slightly unfair. Any case, it is done and dusted so we're already looking forward to our next outing now", he added.