The third round of the International GT Open series at Jerez got off to a good start for Team Novadriver. Cesar Campanico put the team on pole for the first race of the weekend. The Portuguese driver and team-mate Aditya Patel drove to a strong first place in the GT3 class and second overall. This meant that they had to contend with a 15 second handicap for the second race which added something of a challenge to the proceedings.

Aditya started the race fourth on the grid, third in the GT3 category, and though he tried to move up the order and get past Nicky Pastorelli, Patel wasn't able to do so. In order to avoid losing further time behind Pastorelli, Patel came into the pits and handed the car over to Campanico. Of course, Campanico had to wait out the 15 second time penalty in the pitlane. The duo thus lost track position. Campanico, however, has been strong at Jerez in the past too, something which showed when he drove hard to bring the car home just off the podium. 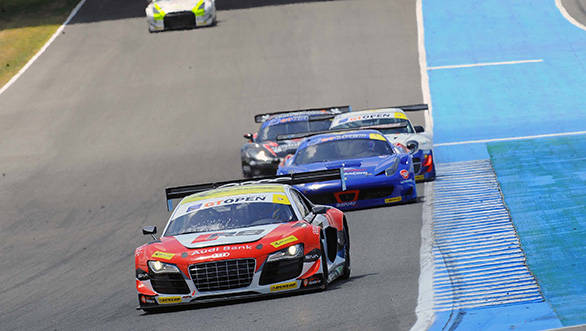 "Overall, it was a very good weekend. We made some huge progress in the last two races and it looks like it is paying off! Now all we have to do is keep the momentum going for the remainder of the season. Once again, a huge thanks to Cesar and the team as well as my sponsors Audi India, JK Racing and Amante," said Patel.

"The second race was good. In a way it was better that we finished fourth as a podium position would have given us a twenty second handicap in the next race. Now we can look forward to fighting for another win in Budapest," is what Campanico had to say.

The Team Novadriver pair are currently twelfth in the championship standings. The next round of the International GT Open will be held at Hungaroring on July 5 and 6.