The Formula Renault 2.0 NEC round at Spa-Francorchamps was something of a steep learning curve for Jehan Daruvala. The young driver from India, in only his first full season of car racing, started the weekend well, setting the second fastest time in the first practice session. The second practice session was even better for Jehan, with the driver managing to set a timing of 2min 19.093sec, which put him at the top of the timing sheets. Qualifying wasn't quite so easy, though, with Jehan managing to finish sixth of the 25 cars on the field. 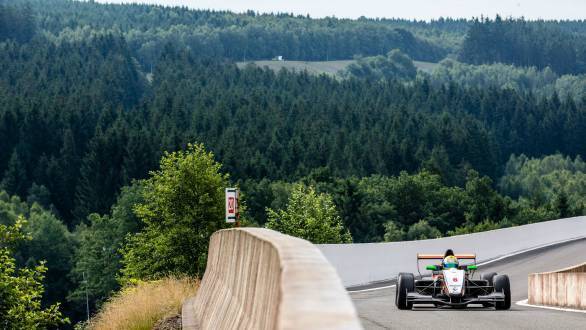 The first race of the weekend saw the drivers evenly matched, with only one overtaking move during the whole race. Credit must be given where it is due - Jehan did try pulling off a plucky manoeuvre on Japanese driver Ukyo Sasahara, however things didn't quite work out. With the pair hurtling over the tarmac at Spa at over 240kph, the Japanese driver managed to squeeze Jehan, who then needed to back off. And with only one lap left in the race, Jehan wasn't able to attack again. Up ahead, Max Defourney won the race, while Jehan had to be content with sixth position.

The second race of the weekend was washed out thanks to torrential rain. The race started and ended behind the Safety Car, and track positions were awarded based on qualifying performance. Louis Deletraz won the race, while Jehan was sixth yet again.

"It's not an ideal result, but considering it was my first race at this historic circuit, I am happy with my pace," said the Sahara Force India Academy driver after the event. "It was difficult to overtake in the first race and, with the race starting and finishing behind the safety car in race two, the result was based on qualifying. Once again I have learnt a lot at this circuit. I look forward to some good races at the next weekend."