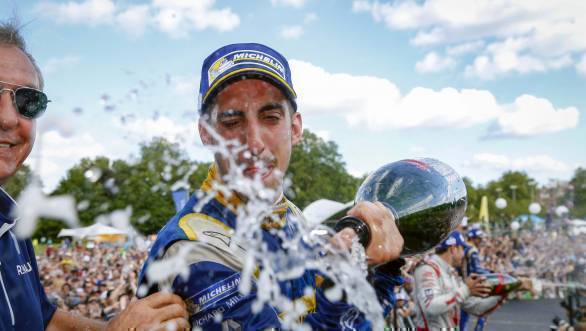 Nicolas Prost won both the races at the season finale of the second Formula E championship - the London ePrix at Battersea Park. But the real excitement had nothing to do with this particular Renault e.dams driver. Instead, it had everything to do with his team-mate Sebastien Buemi.

Heading into the very last race of the season, Buemi and title rival Lucas di Grassi were tied on points, each with 153 points. It was clear that whoever finished ahead at the race, would be crowned champion of the second season of all-electric racing. However, with Buemi on pole, and di Grassi starting two places behind in third, the title battle was very close indeed.

Things got undone, on the very first lap. Di Grassi, however, crashed into Buemi, which put them both in a tricky position. While both the cars weren't yet out of the race, there was just one way to settle the winner. Whoever scored the fastest lap of the race, and thus scored those two valuable extra points, would be the winner. Both drivers tried to outdo each other's times as the race wore on. Ultimately, it was Buemi's time of 1min 24.58sec that couldn't be beaten by di Grassi. Buemi however bettered his own time, setting a 1min 24.150sec lap time too. Di Grassi eventually drove into retirement, parking his ABT Schaeffler Audi in the garage, settling for second place in the championship. The title then belonged to Buemi.

Finishing the race second behind Nico Prost was Daniel Abt, while Jerome d'Ambrosio finished the race third.

Of course, the manufacturer's standings saw Renault e.dams at the head of the table. Mahindra Racing did well to maintain their fifth place in the standings.