Sam Bird took a fine first place at the second Formula E race in Malaysia, with Luca di Grassi and Sebastien Buemi finishing second and third. But their finishing positions in no way reflected their starting positions. Buemi had incurred a penalty because his car was found to be underweight, which meant he started from the back of the pack, while Di Grassi started from ninth place on the grid. It was Dragon Racing's Oriol Servia who started the race on pole dropped out with power issues. 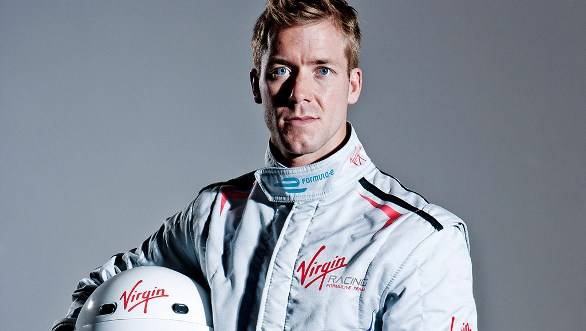 During the race, Di Grassi and Buemi fought their way up to the top of the field. However, they had stiff competition in the form of Mahindra Racing's Karun Chandhok and Bruno Senna. While the pair had started fifth and eighth respectively, they soon found themselves running in the top five. However, after 16 laps, a scuppered pitstop hampered Karun's chances, when he lost one minute and 14 seconds. Post the race Karun said that his regular mechanic had fallen sick the day before and they had a relative rookie in his place.

Bruno in the meanwhile with a Fanboost to his credit looked good enough. Before the pit stop, he tried using it on Nelson Piquet but couldn't overtake him as the gap between the two was wider than what the five second boost could have aided him in overcoming. However, he used it to better effect after the pit stop on arch rival Nicolas Prost. However, all his efforts went in vain as he ran into a wall in the penultimate lap. Post the race, a visibly dejected Bruno said that he was using the Fanboost for the first time and didn't know how much power it held and hence was unable to translate his advantage. He also said that the Putrajaya Street Race was far trickier than Beijing Race, with the track rather uneven and bumpy in several places.

Chandhok moves to joint third place in the championship, given that he finished sixth at Malaysia.

The Formula E circus now moves to Uruguay on December 13 for the third race of the season.

Well, this is not the only thing that you can do in Malaysia given than Formula E races are held on Saturday. You can visit one of the world's tallest buildings, the Petronas Towers or even the KL towers. There are various tourist buses available which for a fixed sum pick you up from a destined location and drop you off to your sightseeing destination, only to later transport you back from where you originally started. Housed in the world's sixth tallest building is the Atmosphere 360° which promises a wide range of cuisine in as the name suggest a revolving restaurant. There are many more shopping malls where you can buy memorabilia or chocolates for family at reasonable rates. Then there is the China Town market which is a code word for a flea market primarily run by the locals.