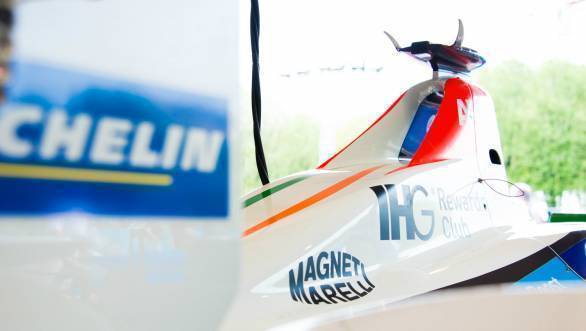 Mahindra Racing has announced a technical partnership with Magneti Marelli. The Italian company has come on board to develop the powertrain for the team's Season 3 car, the M3 Electro. The announcement was made in Paris, just ahead of the ePrix.

In addition to the agreement, Mahindra Racing and Magneti Marelli will also have a commercial partnership. This means starting with the Paris ePrix in Season 2, Magneti Marelli branding will be visible on Mahindra's M2Electro.

Dilbagh Gill, the team principal of the Mahindra Racing Formula E Team said in a press release to the media, "Mahindra Racing has developed a very strong relationship with Magneti Marelli over the past few months while developing our powertrain for the next season. We have found a shared ambition in Magneti Marelli and we look forward to the first test of the M3Electro. Mahindra Racing also welcomes Magneti Marelli as a commercial partner and we are proud to display their branding on our car for the last five races of this season and into season three."

Speaking exclusively to OVERDRIVE, though, Gill also stated that one of the reasons that the team decided to partner with Marelli, is because they wanted an engine partner who would help them build a compact engine that could be mounted transversely on the M3Electro, as opposed to horizontally.

Roberto Dalla, motorsport director at Magneti Marelli said, "Performance, efficiency and reliability are going to be key elements to race in season three and we believe that the solution developed with Mahindra Racing will be able to demonstrate the capabilities of Mahindra and Magneti Marelli which will help the team to be successful in the FIA Formula E Championship."