Formula 1 has finally unveiled the new direction in which the sport will head beginning the 2021 season. The sport's technical regulations have been finalised, as well as the sporting and financial regulations (budget caps included) that will come into play in 2021.

The announcement was made at a special press conference at the US Grand Prix, after the FIA World Motor Sport Council unanimously approved the rules, and was presided over by FIA President Jean Todt, F1 CEO Chase Carey, F1 motorsport managing director Ross Brawn and FIA technical head of single-seaters Nikolas Tombazis. 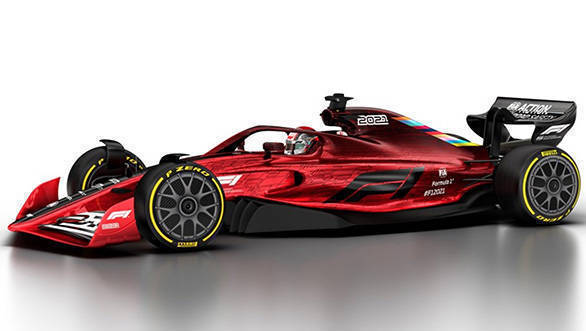 The new cars for 2021 boast a new design philosophy and look. The cars now have sweeping bodywork, simplified front wings, bigger rear wings. In addition, the cars also have increased underbody aerodynamics. Plus new suspension and low-profile tyres. According to the official Formula 1 website, "It's also proposed that the wheel rims will be fitted with a rotating LED display panel, to provide information to spectators, while a bodywork display panel is also proposed for the same reason."

The whole point of all these cosmetic changes, is to make the racing closer. This will be achieved by finding a way to decrease the loss in downforce that chasing cars experience while stuck in the "dirty air" behind another car. Currently cars lose more than 40 percent downforce, but in 2021, that is set to decrease to five to ten percent.

Another significant change will be the budget cap introduced for the 2021 season. This is set at USD 175 million per year for each team, and includes everything related to the racing itself. However, it excludes the marketing costs, driver salaries, and the salaries of the team's top three personnel.

Rules have also been put in place in order to limit the car upgrades over the course of race weekends. And standardised parts, like fuel pumps; parts that have standard designs like for wheel covers; and restrictions on the number of times certain parts can be replaced, will be introduced.

For now, it seems as though the power units of the cars are unchanged, but the exhaust systems are now part of the PU components that are also limited during the season. Drivers can each use six before getting a penalty. The cars will weigh around 25kg more than the current cars because of the new tyres, chassis changes and PU materials, which will make them slower initially. Gearbox design will also be more restricted, and configurations will be frozen - also a cost saving measure.

With the number of races growing to a maximum of 25 per season, there are changes being made to the race weekend in order to help the teams deal with the expanded calendar. The pre-race press conference will now be switched from Thursday to Friday, before FP1 and FP2. Cars will also have to be in parc ferme conditions (race trim) at the start of FP3.

The rules now state that all teams must run at least two practice sessions with drivers who have completed two Grands Prix, or less, in order to give the next generation of F1 stars their moment in the spotlight.

Further cost cutting measures include restrictions on the number of wind tunnel tests teams can do each week, with CFD simulations being preferred instead.

The 2021 rules will now be discussed between the teams, F1 and the FIA, and there will be revisions and refinements over the coming months to make sure that the sport goes in the right direction.