The 12th New Delhi Auto Expo will be the venue for the unveiling of Ford's global concept vehicle. Based on a global design philosophy, this concept has been created specifically keeping in mind the needs of Indian costumers and other emerging markets.

This car will give us an idea about the design of future compact cars that are expected to come out of Ford's stable. This is very important as the compact car segment is the most competitive and has been outpacing the industry for the past decade taking up almost a third of total sales in 2013. Ford anticipates the sales of compact cars to double to nearly two million units by 2018. We believe that this concept is the same Ford KA concept which was unveiled at Brazil in November 2013. That car was revealed as a strong precursor to an all-new global compact car from Ford. Ford claimed that it had good fuel economy, a roomy interior with comfortable seating for five occupants, air conditioning and technologies such as a central docking station for mobile devices and SYNC.

Joe Hinrichs, president of The Americas for Ford Motor Company who was present during the unveil of the KA Concept in Brazil had then said, "It will delight consumers with its sleek design, clever technology, attention-to-detail quality and superb craftsmanship. It also shows the continued importance of our South American design and engineering capabilities to serve markets around the world. It's truly another global design and engineering milestone for Ford." 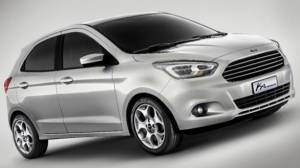