Bridgestone India, a subsidiary of the world's largest tyre and rubber company, Bridgestone Corporation has introduced the Firestone  brand in India. While Firestone was founded in 1900, the American tyre brand has been part of the Bridgestone family since 1988. The brand will cater to the passenger car segment in India. Two new models, FR500 and LE02 have been introduced aimed at the passenger car and SUV segment.  The FR500 will be available in rim sizes ranging from 12-inch to 16-inch. 24 sizes are available in total. The LE02 meanwhile will be available in three sizes meant to fit 15 and 16-inch rims.

The tyres will be sold under existing and new dealerships. The company initially aims to make the tyres available in multi-brand setups. Since Bridgestone is already an established brand in India, the Firestone brand will make use of the the company's wide reach. While Bridgestone has a wide range of tyres available in India, the Firestone brand will be positioned lower. According to sources, expect pricing to be 10 percent less than a similar Bridgestone tyre. Bridgestone also recently introduced their two-wheeler tyres in the Indian market. 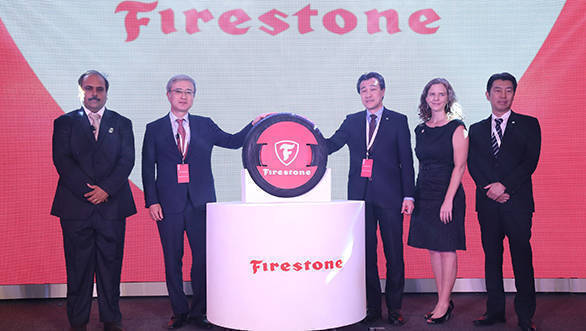 Interestingly Firestone is also known to manufacture performance tyres. The company is also quite active in motorsport. The brand is known to be associated with the iconic Indianapolis 500 race in U.S.A. The brand has a global presence and is keen on capturing the passenger car tyre market in India.

The company has no plans to export tyres from India, besides the two models introduced are made in India for India. The tyre compound and pattern has been developed keeping in mind Indian road conditions. Firestone mentioned to OVERDRIVE that there are plans to introduce more models suited for SUVs by 2018. The models will be targeted at customers who drive off-road as well as on-road. Currently the only SUV tyre is the LE02 and is an on-road tyre. These special SUV tyres will be imported from Thailand.

The FR500 and LE02 meanwhile will be manufactured in India at existing Bridgestone plants located in Chakan, Pune and Kheda, Indore.