The fifth edition of the Cartier 'Travel with Style' Concours d'Elegance has been scheduled to be held in February 2017 at the Falaknuma Palace grounds in Hyderabad. Like the previous editions, this year too will feature vintage cars and motorcycles from various eras and classes. The Cartier 'Travel with Style' Concours d'Elegance is now part of the FIVA (Fédération Internationale des Véhicules Anciens) World Motoring Heritage Year (WMHY) programme with patronage from UNESCO, and is listed as a Type-1 event.

Manvendra Singh, curator of Cartier 'Travel With Style', is happy to have international recognition for the event, and a distinguished panel of judges who "love to return to the event". He also stated that the organisers are very proud to host an event that promotes Indian automotive heritage.

The Concours d'Elegance in India has seen a large demand for participation and has led to higher vehicle restoration standards in the country. To promote Indian automotive heritage, only cars and motorcycles with an Indian history or recent imports restored in India will be eligible. Since this edition is being held in South India, entries from the region will have higher preference.

The chief judge for this edition of the Cartier Travel with Style is Simon Kidston, who judges and commentates at the famous Pebble Beach Concours d'Elegance, Villa d'Este Concours in Italy and the Mille Miglia.

The vehicle class list for the 2017 Concours d'Elegance in India is as follows:

You can send your entries to ctws2017@gmail.com. The event requires prospective entrants to send all the details about the car or motorcycle including model details, chassis numbers and the specific history of their vehicles, with recent photographs. The last day to send them is September 30. 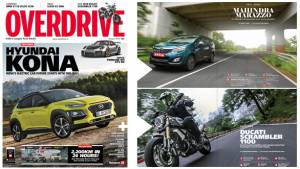 Could the next Audi R8 be a 760PS...
Advertisement