The third round of the International GT Open series at Jerez was the highpoint for Aditya Patel and his Team Novadriver team-mate Cesar Campanico, when the duo managed to win the GTS class in Race 1 of the event. Unfortunately, though, they weren't able to replicate their success at the fourth round of the championship at Budapest.

The duo started the first race with Campanico at the wheel, with the driver quickly getting passed by a succession of cars. He then managed to make up a few places before handing over the car to Patel. Unfortunately for Patel, he had to deal with a hard charging ADAC GT Masters Champion, Daniel Keilwitz, who muscled his way past him. The move made Patel run wide, which meant that Thomas Jager also managed to make his way past the Indian driver, who eventually finished the race fifth. 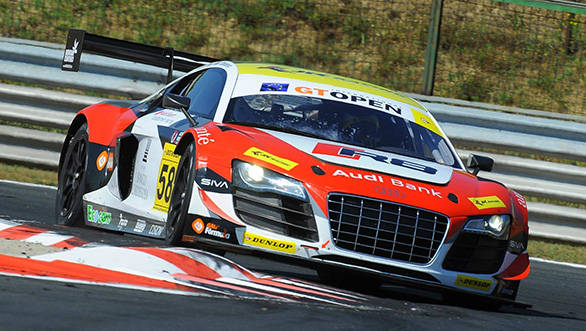 It was Patel who took to the wheel for the start of the second race and it wasn't a particularly pleasing start for him. An incident with another car meant that he lost a position during the race and then needed to push hard to make up a few places. He managed to climb to third place before handing the car over to his team-mate. But the pace of the other cars proved too much for the R8 LMS, and the duo had to eventually settle for sixth place.

"Well, what can I say? It wasn't the kind of weekend we expected after Jerez. We just have to hope we don't suffer as much in the other circuits. Right now we are down nearly eight kmph on top speed. Hopefully the organizers will look into the matter. Till then, we can only keep pushing with what we've got," is what Aditya Patel had to say after the race.