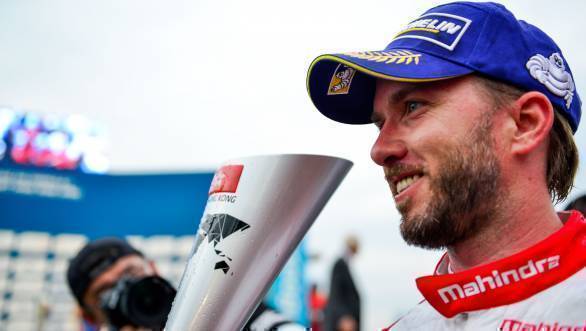 The third season of the FIA Formula E championship got off to a good start for Mahindra Racing. The team's German driver, Nick Heidfeld managed to take a podium finish at the Hong Kong ePrix, moving all the way from 10th place to third. In fact, Heidfeld took fifth place during the first lap itself, and managed to use the energy of his M3Electro very efficiently, gaining positions during the mid-race car swap. Heidfeld crossed the chequered flag just before his car had zero battery.

It wasn't the ideal debut weekend for Heidfeld's team-mate Felix Rosenqvist. The Swedish driver started sixth on the grid, but was caught out due to traffic early on in the race. However, a high speed spin meant that he was at the back of the pack soon enough. The Mahindra Racing team tried to remedy this with an early car swap, but the best that Rosenqvist could manage after that was a 15th place finish.

"I'm very happy to be back on the podium in this Formula E season's opening race. It's something you don't expect when you start 10th on the grid! It is a nice result for the team considering all the hard work over the last couple of months," said Heidfeld of his performance.

Meanwhile, Rosenqvist said, "I had a good start, then in turn one there was a big pile up on the inside and I couldn't really get out. It felt like I was really competitive during the race but at one point I risked too much. While I am not 100% up to speed with data and energy management in Formula E, I think what's really promising is that I can drive efficiently, but also be very quick. There's still more to work on but the speed is there."